What 2016ers Say About Obama’s Nuke Deal With Iran 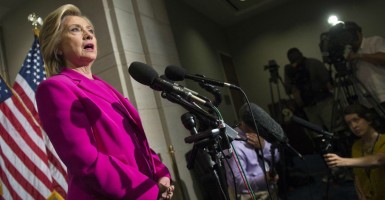 Within hours of President Obama’s announcement of an agreement with Iran that he said would “stop” the Islamic regime’s march toward a nuclear bomb, most of the Democrats and Republicans who hope to succeed him had offered a response.

“This is a very important moment,” Democratic front-runner Hillary Rodham Clinton told reporters this morning on Capitol Hill, where she was visiting lawmakers from her party.

“Based on what I know now,” Clinton added, “this is an important step in putting a lid on Iran’s nuclear program.”

>>> Commentary: The Most Glaring Flaws in the Iran Deal

Clinton, who served  as secretary of state during Obama’s first term, said the president called her Monday night to tell her a deal with Iran had been reached. She said she “applauded” her successor, Secretary of State John Kerry, and other main players whose efforts were part of  “bringing about this conclusion.”

Staffers for Vice President Joe Biden, who is weighing whether to enter the race for the Democratic nomination, began to tweet a series of White House talking points on the agreement before Obama had concluded his 14 minutes of remarks.

"This deal is not built on trust. It's built on verification." –President Obama on #IranDeal

"If Iran violates a deal, all of these sanctions will snap back into place." –President Obama on #IranDeal pic.twitter.com/WqRiJHjtyb

Mike Huckabee, the former Arkansas governor, was the first to weigh in on the deal.

Shame on the Obama admin for agreeing to a deal that empowers an evil Iranian regime to carry out its threat to "wipe Israel off the map."

Two other GOP contenders, Sen. Lindsey Graham of South Carolina and former Hewlett-Packard executive Carly Fiorina, were among the first to criticize the agreement in television and radio appearances.

.@LindseyGrahamSC on #IranDeal: This is a terrible deal, I really fear that we set in motion a decade of chaos http://t.co/W1imZnhziY

.@CarlyFiorina: "History tells us that Iran will cheat. Contrary to what this administration has said; this will give Iran nuclear weapons."

Iran has demonstrated bad behavior & we know they have been trying to cheat on this deal. https://t.co/fwQYuA1Eys #Carly2016

Two former elected officials who are challenging Clinton for the Democratic nomination—Lincoln Chafee, once governor and senator from Rhode Island, and Jim Webb, previously a senator from Virginia—had much different initial reactions.

This is an important moment in terms of the future of American foreign policy. I look forward to reading & examining the agreement. #Iran

Aides to Sen. Marco Rubio of Florida, who pointed to his work on foreign affairs before entering the Republican race, tweeted a series of comments based on his posted statement following Obama’s announcement.

Based on what we know thus far, I believe that this Iran deal undermines our national security.

Pres Obama has consistently negotiated from a position of weakness, giving concessions to a regime that has American blood on its hands.

I expect that a significant majority in Congress will share my skepticism of this agreement and vote it down.

“The president is playing a dangerous game with our national security, and the deal as structured will lead to a nuclear Iran and, then, a nuclearized Middle East,” New Jersey Gov. Chris Christie, also a Republican, said in a prepared statement.

My statement on the #IranDeal pic.twitter.com/C6cTTjtHKP

Wisconsin Gov. Scott Walker, who jumped into the GOP race for president Monday evening, put his initials on a series of tweets on the Iran deal beginning at 9:57 a.m.

.@BarackObama’s nuclear agreement with #Iran will be remembered as one of America's worst diplomatic failures. – SW

Instead of making the world safer, this #Iran deal will likely lead to a nuclear arms race in the world’s most dangerous region. -SW

I call on all congressional leaders and presidential candidates, including @HillaryClinton to repudiate this bad #Iran deal. – SW

Clinton’s strongest challenger in the Democratic race currently is Sen. Bernie Sanders, an independent from Vermont who caucuses with the Democrats. Sanders  called the administration’s Iran agreement a “victory over saber-rattling.”

The #IranDeal is a victory for diplomacy over saber-rattling and could keep us from being drawn into another never-ending war.

However, in a statement on the Iran deal at 10:26, Sanders also took a wait-and-see view: “I look forward to examining the details of this agreement and making sure that it is effective and strong.”

Louisiana Gov. Bobby Jindal came out swinging against the deal just before 11 a.m. In his initial tweet, the Republican hopeful said that if Clinton “goes along with President Obama’s efforts to appease Iran, it will make our enemies stronger.” He then added:

This dangerous deal has put Iran on a path to obtaining a nuke, depleted our military strength & endangered Israel. http://t.co/limslQMOx4

>>> Commentary:  The Truth About 6 of Obama’s Claims on Iran Deal

Among presidential contenders not heard from by 11 were the sixth major Democrat in the race, former Maryland Gov. Martin O’Malley, and, from the GOP side, former Florida Gov. Jeb Bush, Sen. Ted Cruz of Texas, and Sen. Rand Paul of Kentucky.

The Texas governor called it “a staggeringly bad deal” and “a fundamental betrayal of the security of the United States and of our closest allies, first and foremost Israel.” Cruz added:

But thankfully, it is not a done deal.  … Congress will have 60 days to review it, and the American people will have 60 days to tell their elected representatives just what they think of it. … [E]ven if President Obama won’t see it, we know the leaders of the Islamic Republic [of Iran] who lead crowds in chants of ‘Death to America’ and ‘Death to Israel’ are not our partners in peace, and must not be put on the path to a nuclear bomb.

The nuclear agreement with Iran is a dangerous, deeply flawed, and short sighted deal. My full statement: http://t.co/sSftOAkyAM

“The deal does not require Iran to come completely clean up front about possible military dimensions of its nuclear program or include true anytime/anywhere inspections necessary for a nuclear program shrouded in deception and lies,” Bush said, adding: “This isn’t diplomacy — it is appeasement.”

"President Obama’s decision to sign a nuclear deal with Iran is one of the most destructive foreign policy decisions in my lifetime."

Rick Santorum, the former Republican senator from Pennsylvania,  commented on the deal in his scheduled media appearances such as this one:

.@RickSantorum explains to @ChrisCuomo why he doesn't like #IranDeal – "Nothing in this deal curbs their terrorism." http://t.co/62ji7R5D3N

George Pataki, who served three terms as a Republican governor of New York, began a series of tweets condemning the deal just before 1 p.m.

It should be painfully obvious that a government that endorses the credo "Death to America" is a danger to our safety & security. #IranDeal

As of 2 p.m. Paul still had not issued a statement, nor had two fellow GOP hopefuls, retired pediatric neurosurgeon Ben Carson or Ohio Gov. John Kasich.

The #IranDeal demonstrates the tradition of American leadership to make our country, and the world, a safer place. pic.twitter.com/uoPFrKQtPF