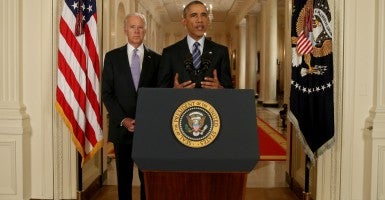 President Obama made some dubious claims during his remarks about the Iran nuclear deal. (Photo: Andrew Harnik/dpa/picture-alliance/Newscom)

Months of Iranian pressure on the United States brought its fruition. Iran got a deal that legitimizes its nuclear program, rewards its defiance of international treaties and obligations, and provides it with additional billions of dollars to continue its terrorist activities in the Middle East.

Here are the White House’s most egregious misinterpretations of the deal, looking at claims President Obama made during his remarks about the deal this morning.

1. “A comprehensive long-term deal with Iran that will prevent it from obtaining a nuclear weapon.”

The concluded deal does not prevent Iran from obtaining a nuclear weapon in the future. The deal imposes temporary restrictions on Iran’s illegal nuclear program.

After their expiration, Iran will have better resources to pursue more advanced nuclear technologies and potentially build a nuclear weapon faster than would be the case had sanctions remained in place.

2. “Every pathway to a nuclear weapon is cut off.”

Iran is permitted to retain its enrichment infrastructure, including advanced centrifuges. The administration’s concession on uranium enrichment is a serious blow to a decade old principle of U.S. nonproliferation policy.

Yet Iran, which developed this capability in defiance of its existing international obligations, is being rewarded for its bad behavior by lifting sanctions on its country, including sanctions concerning shipping, arms sales, transportation, banking and precious metal trade.

3. “The deal is in line with a tradition of American leadership.”

While allies obliged, adversarial Iran is getting a deal that legitimizes its illegal uranium enrichment program.

Allies will demand the Iranian deal for themselves and the United States has given up any legitimacy it had in demanding otherwise. Saudi Arabia has already stated it will pursue a similar nuclear program. Others are likely to follow creating a less stable environment in already tense Middle East.

4. “America negotiated from a position of strength and principle.”

Time and again Obama conceded on key principles that would improve a chance that the United States is getting a deal beneficial to its national security interest. From a deal that stops Iran’s nuclear weapon pursuits to a deal that delays them at best (and speeds them up at worst). From a deal that allows anytime anywhere inspections given Iran’s past deception, to more restricted inspections that cannot interfere with Iran’s national security and military activities. Iran is not permitted under the Nonproliferation Treaty to pursue a nuclear program with military applications.

Obama is in a better position to negotiate Iran’s nuclear deal because of congressional and international sanctions that Obama is promising to dismantle. Any future president will have to deal with consequences of Obama’s concessions on all aspects of Iran’s nuclear and ballistic missile program.

Future U.S. presidents will have to deal with Iran that has hundreds of billion dollars more resources to pursue its nuclear program, access to modern technologies, and has been able to maintain nuclear know-how and infrastructure, both nuclear and ballistic missile, to threaten U.S. interests on an unprecedented scale.

6. “Consider what happens in a world without this deal. Without this deal, there is no scenario where the world joins us in sanctioning Iran until it completely dismantles its nuclear program.”

The world has already joined the United States in sanctions. An alternative to a no-deal is to continue them. After all, sanctions are the only reason why Iran negotiated to begin with.

A continuation of sanctions is a sound alternative to a bad deal that the Obama administration has negotiated. Continuing sanctions will limit Iran’s ability to fund terrorism across the Middle East, access to advanced technologies and rare materials that will allow Iran to further improve its nuclear and ballistic missile program, and the pressure of sanctions would give the United States more time to negotiate a better deal.

>>> Commentary: The Most Glaring Flaws in Obama’s Iran Deal