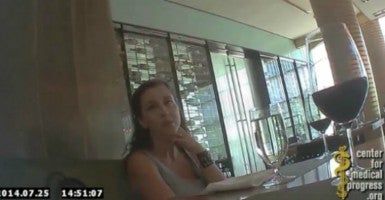 Photo: The Center for Medical Progress

The video shows Deborah Nucatola, senior director of medical services at Planned Parenthood, meeting with actors portraying researchers and potential buyers of fetal organs and tissue and discussing the acquisition of the “specimens” including “heart, lungs and liver.”

“I’d say a lot of people want liver. And for that reason, most providers will do this case under ultrasound guidance, so they’ll know where they’re putting their forceps,” Nucatola said.

In a statement, Eric Ferrero, the vice president of communications at Planned Parenthood Federation of America, said that Planned Parenthood is merely donating “tissue” to facilitate research. Ferraro said there was “no financial benefit for tissue donation for either the patient or for Planned Parenthood” although “in some instances, actual costs, such as the cost to transport tissue to leading research centers, are reimbursed, which is standard across the medical field.” Ferrero added:

A well-funded group established for the purpose of damaging Planned Parenthood’s mission and services has promoted a heavily edited, secretly recorded videotape that falsely portrays Planned Parenthood’s participation in tissue donation programs that support lifesaving scientific research. Similar false accusations have been put forth by opponents of abortion services for decades. These groups have been widely discredited and their claims fall apart on closer examination, just as they do in this case.

The Center for Medical Progress issued a rebuttal to Planned Parenthood’s statement:

Planned Parenthood makes two key admissions in their statement today: 1) Aborted fetal parts are harvested at their clinics, and 2) money is exchanged in connection with this.

They also tell several lies: 1) That proper consent is obtained from patients, 2) that Planned Parenthood does not make money off the body parts, and 3) that everything is legal.

The Center for Medical Progress released a short, edited video of the conversation first, but has also made video of the full meeting available.

In the full video, Nucatola says that the “benevolence” of making the fetal body parts available “holds as much value as any cash prize.”

Nucatola also said that Planned Parenthood controls “40 percent” of the abortion market in the United States.

Marjorie Dannenfelser, the president of the Susan B. Anthony List, said in a statement that “this film reveals the dark side of humanity as did the case of Kermit Gosnell.”

“The moment when the destruction of a human being becomes just business as usual is a moment we must address,” Dannenfelser said. “Planned Parenthood, America’s largest abortion provider, so devalues human life they are now in the business of harvesting body parts. They are wheeling and dealing with tiny hearts, livers, lungs, and even heads, of the children their practitioners destroy during late term abortion procedures. This is an eye-opening, stomach-churning moment. We are a better nation than this. Ending late term abortion will preclude this horror.”

Shortly after the release, Planned Parenthood trended on Twitter.

What in the hell is happening at #PlannedParenthood? No matter if u r pro life/pro choice, the news today is horrific #stunned

We need a full-fledged Congressional investigation of Planned Parenthood. Taxpayers should not be forced to fund human butcher shops.

Doesn’t change my basic pro-choice beliefs, but the extremists at #PlannedParenthood don’t make it easy, do they?

I’m completely pro-choice, but that #PlannedParenthood video made me literally sick. I couldn’t get through it.

If a fetus is not a human, but “clumps of cells”, then why would their organs be useful to buyers? #PlannedParenthood

#PlannedParenthood: a must read. #KnowledgeIsPower https://t.co/nZkXl9orU7

Several lawmakers have expressed concern and pledged to investigate.

#PlannedParenthood shouldn’t receive one more dime of taxpayer money. Need action on #HR7 in the Senate.

Absolutely horrifying. Disgusting. This is why we have fought to end federal funding for Planned Parenthood. https://t.co/0RKh8LJ6go