Can Court Clerks Decline to Do Gay Marriages? How It’s Playing Out in the States 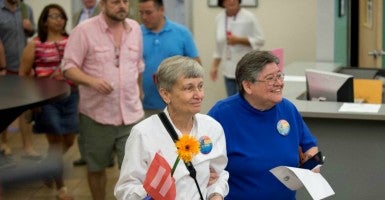 A few cases of public employees who cite their faith in declining to issue marriage licenses to same-sex couples have grabbed media attention, but similar concerns exist in scores of courthouses across America, a lawyer for a prominent Christian legal organization says.

“In most instances the government can accommodate the religious beliefs of the objecting person,” @AllianceDefends’ Jeremy Tedesco

A suit against a Kentucky court clerk was scheduled to be heard today by a federal judge, and county commissions were set to vote on the resignations of clerks in Tennessee and Texas.

The cases, the lawyer told The Daily Signal, are just three examples of difficult choices created by the Supreme Court’s 5-4 ruling legalizing same-sex marriage throughout the nation.

“I think the bottom line is, in most instances the government can accommodate the religious beliefs of the objecting person,” said Jeremy Tedesco, senior counsel for Alliance Defending Freedom.

An ultimatum of “comply or lose your job” by some LGBT activists and their supporters, he said, runs counter to “our rich history of religious freedom and religious accommodation.”

Civil disobedience to the ruling, and to instructions issued by governors and other state authorities, initially occurred among clerks and other court employees in Alabama, Louisiana, Mississippi, Kentucky, Ohio, Tennessee, and Texas.

However, Tedesco said the offices of Alliance Defending Freedom, or ADF, have been “inundated” by calls and emails from courthouse employees and officials who aren’t sure what their office will do, want to understand their rights, or have asked for an accommodation for their faith but haven’t yet gotten one.

In some cases, clerks and other court employees have resigned rather than issue licenses for same-sex nuptials.

In others, LGBT rights groups and their supporters are demanding that employees with objections quit or be fired or impeached.

It doesn’t have to be this way, Tedesco says.

“It’s incumbent on those governments that don’t have a system in place to put it in place,” he said.

At this point, Alliance Defending Freedom is providing basic counsel in requests “from California to North Carolina and all states in between,” Tedesco said, but is not formally representing anyone. He added:

It’s troubling [to suggest] you can’t be a Christian and have any of these jobs—or be of any faith that believes marriage is between a man and a woman. That’s just a very disturbing reaction to Obergefell, especially when the court went out of its way to say the First Amendment provides protections for people who continue to disagree with this.

“Government officials have a duty and a responsibility to impartially administer laws,” @ACLUofKY says.

“When our laws are updated or changed, government officials have a duty and a responsibility to impartially administer those laws,” Aldridge said in announcing legal action against Rowan County Clerk Kim Davis.

A Resignation in Texas

The Associated Press is one of the media organizations tracking local court offices where some public servants declined to provide marriage licenses to gays or lesbians. Initial resistance for religious reasons appears to have dwindled to cases in Kentucky, Tennessee, and Texas, AP reports.

In Texas, commissioners in Rusk County were slated to vote Monday on the resignation Thursday of County Clerk Joyce Lewis-Kugle, who said her faith did not allow her to comply.

The legal test of a burden placed on religious liberty by the government is whether that burden is the “least restrictive means” to carry out a “compelling state interest,” Paxton wrote.

If other authorized individuals may issue marriage licenses, he argued, the government should not compel an employee to act against his conscience.

Rebecca L. Robertson, legal and policy director of the ACLU of Texas, disagreed.

“Religious liberty is the birthright of every American,” Robertson said in a letter to clerks of two Texas counties where the ACLU said “recalcitrance” had been reported by residents. “But the first duty of public officials is to uphold the law, even if doing so conflicts with their personal religious convictions.”

Clerks who follow the Texas attorney general’s July 5 guidance, the state ACLU said, would engage in “official misconduct” that “could lead to their removal from office and expose them to damages in civil litigation.”

In Tennessee, commissioners in Decatur County were to act on a permanent successor to replace Gwen Pope, who resigned July 5 as county clerk, and to fill related openings.

“I honestly believe God will take care of us,” Pope told The Jackson Sun after she and two co-workers quit.

Decatur Mayor Mike Creasy said he disagreed with the Supreme Court ruling but intended to enforce the law.

A Federal Case in Kentucky

Davis told the Louisville Courier-Journal that “deep religious convictions” prevent her from complying with the Supreme Court’s decision.

“It’s a deep-rooted conviction,” Davis said. “My conscience won’t allow me to do that. It goes against everything I hold dear, everything sacred in my life.”

For days, protesters outside her office have demanded she step down.

Bunning, the federal judge hearing the case, is an appointee of President George W. Bush and the son of former major league pitcher and U.S. Sen. Jim Bunning.

>>> Update:  AP reported that Bunning suspended the hearing until next Monday at the earliest, saying attorneys from the American Civil Liberties Union had not formally notified Davis of the lawsuit against her.

In a meeting last week, Beshear told Casey County Clerk Casey Davis—who is not related to Kim Davis—that he should resign if he cannot do so. Davis had suggested the government allow residents to purchase marriage licenses online so that clerks would not be personally involved.

Also in Kentucky, Billy Joe Lowe, clerk of Green County, told WFPL-FM on Thursday that his office would not accept license applications from same-sex couples.

Employees shouldn’t have to resign or be fired, Tedesco said.

Governors, mayors and other high officials are off base in ordering clerks and other employees to comply, the Alliance Defending Freedom lawyer says, as are those who threaten civil liability or even criminal prosecution.

Most local offices and agencies that issue marriage license or officiate at weddings, Tedesco argues, already have enough employees sharing duties that it is not difficult to arrange for someone without religious objections to serve same-sex couples.

The purpose of the federal statute known as Title VII is to protect the religious beliefs of employees in the workplace. Typically, state law provides similar protections.

The law isn’t just about accommodating an employee’s faith but about the duty of the employer to do so, as long as it doesn’t impose an undue burden on the workplace.

That landscape, as well as rights secured in the Constitution, will form the backdrop for determining how licenses for same-sex marriages will be issued in courthouses across the nation in the wake of the Supreme Court’s ruling.

Although each local workplace may have its own challenges, many courthouses already have implemented systems to accommodate the religious beliefs of some employees, while others are figuring one out.

‘Not the Way a Free Society Works’

The Constitution and existing state and federal law do not require Americans to have to choose between their job or their religious convictions “after the world was made new by the Supreme Court,” Tedesco said:

This is not the way a free society works. This is a massive sea change in our culture and our law that the Supreme Court has mandated. And the answer simply can’t be—and of course this is the answer of the other side—‘You can’t hold these positions if you hold those beliefs any longer, especially if you want to act consistently with them.’

By the same token, Tedesco said, a supervisor who wants to make a political point can’t simply say he or she can’t make an accommodation for an employee who believes marriage is between a man and a woman—and that the employee can’t work there any longer.

“You can’t just shirk your duty and fire people. Or tell them, ‘Make a choice. Do this or leave.’ ”

Before the Supreme Court decision, the definition of marriage already had been changed in 30 states—in most cases by court rulings rather than legislation or voter initiatives.

The repercussions of the high court’s action will play out over many years and is sure to involve litigation.

Tedesco said the climate reminds him of procedures and statutes of the 1950s and 1960s under which job applicants or employees were asked to sign a document saying they had no affiliation and agreement, current or past, with the Communist Party. The Supreme Court, after upholding such measures for several years, eventually struck them down.

Similarly, “this is like an ideological litmus test on marriage,” Tedesco argued:

Do you believe—or have you ever been affiliated with a faith organization that believes—that marriage is between a man and a woman? If so, you can’t have this job, or you’re fired from this job. I think the analogy is spot on.  … Should you be able to exclude people of faith from government jobs? There’s got to be a way that those two can be simultaneously pursued.