225 Years Ago Washington, DC, Was Founded: Here’s Why It Will Never Become the 51st State 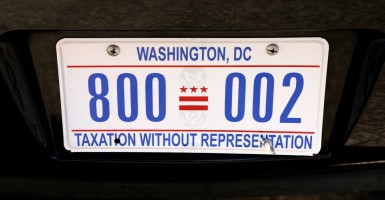 It’s that time of the year again: U.S. House Del. Eleanor Holmes Norton is ramping up her efforts to make Washington, D.C., the 51st state in the Union.

Her bill, which would create the state of New Columbia from the existing District of Columbia, is the latest in a long line of legislative proposals with the ultimate goal to secure full voting representation for the District in Congress.

Appealing to patriotic sentiment, advocates of making D.C. into a state have clothed their campaign in the rhetoric of the American Revolution.

They cry “Taxation Without Representation,” a slogan plastered on D.C. license plates (the DMV “encourages” all D.C. residents “to support D.C.’s quest for full representation in the U.S. Congress”) and made into a hashtag campaign on Twitter.

Today, on the 225th anniversary of the founding of Washington, D.C., it is a good time to reflect on why making D.C. the 51st state is not only unconstitutional but overlooks the fact that D.C. residents are already well-represented.

Legislative proposals to make D.C. a state violate the Constitution in at least two ways.

Article I, Section 8 grants Congress the right to “exercise exclusive Legislation” over the “District” that is “the Seat of the Government of the United States.”

Congress cannot simply change the “Seat of the Government” into a state or delegate its power over the District to the government of a new state.

It took a constitutional amendment to give D.C. residents the ability to vote for president because they are not a state and Congress could not make them a state.

Ratified in 1961, the 23rd Amendment recognizes Congress’s authority to oversee the manner in which the District appoints electors to the Electoral College.

Congress cannot single-handedly eliminate the power this amendment grants only to Congress.

In Adams v. Clinton (2000), the D.C. Circuit Court of Appeals found that legislative efforts to allow for voting representation in Congress were unconstitutional.

The three judge panel made it clear that the Constitution would need to be amended in order for such changes to take place within the law.

Congress itself recognized this in 1977 with a constitutional amendment to grant D.C. representation—it failed to gain the approval of the states.

The Founders reasoned that the whole Congress would represent the interests of the residents of the District of Columbia.

According to Justice Joseph Story, those who lived in the District “would receive with thankfulness such a blessing, since their own importance would be thereby increased, their interests subserved, and their rights be under the immediate protection of the representatives of the whole.”

This remains true today, especially in light of the fact that federal spending often benefits D.C. residents more than those living in the states, whose residents usually receive far less in federal funding per capita than D.C. residents.

In fact, seven of the 10 wealthiest counties in America surround Washington, D.C.

The interests of the residents of the District are already highly promoted, even perhaps at the expense of the rest of the country.

Furthermore, D.C. residents are represented by a second body, the Council of the District of Columbia.

With the passage of the District of Columbia Home Rule Act in 1973, Congress ceded a portion of its authority to govern local affairs to a city council.

The council is made up of 13 members and a mayor—each of which is an elected position.

Though the campaign to make the District of Columbia a state and grant it full congressional voting will lumber on, supporters should come to terms with the constitutional and practical impediments outlined above.

If proponents of D.C. statehood want to live in a state and not a district, they have some options that are very close by.