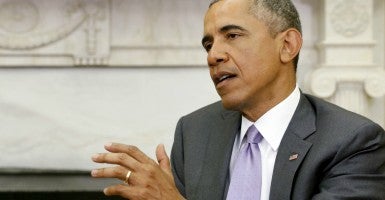 President Barack Obama has pitched his new overtime regulations as a way to raise wages. However, even economists who support the change admit that’s unlikely to happen. Instead, they expect employers to cut workers’ pay by an offsetting amount.

So how will this new overtime rule affect the economy? Primarily by forcing salaried workers to log their hours. That’s right—more work, same pay.

Under federal law, all employees paid hourly rates get overtime—1.5 times their regular wages—for working more than 40 hours a week. The law exempts some salaried employees.

Employees with sufficiently advanced job duties (generally in executive, professional, or administrative jobs) and who make more than a set amount can get paid a flat salary for the work they do.

The administration just proposed raising that salary level to $50,440 a year and increasing it each year going forward. Employees making less than that amount, no matter what they do, would qualify for overtime pay.

At first glance this looks like a great idea. Who could oppose more workers getting overtime? However, economics didn’t earn the moniker “the dismal science” for nothing. The fact is, these regulations will have little effect on pay.

Economists have found that employees and employers care mostly about their overall employment package: total hours worked and total pay offered for those hours. They don’t care much about the pay rate for individual hours, provided the overall package doesn’t change. So when the government requires employers to pay extra for overtime hours, they do—and reduce base wages by about the same amount. Workers’ weekly take-home pay changes little.

Overtime only affects total pay for workers making near the minimum wage. Their employers cannot legally cut their base pay. However, these workers already automatically qualify for it. Overtime has little effect on total compensation for everyone else.

Many economic studies come to this conclusion. One recent study examined what happened when Japanese courts extended overtime to previously exempt salaried employees—precisely what the administration proposes. Japanese employers reduced base pay by an amount equal to the new overtime eligibility. Average hourly pay—including overtime—remained unchanged.

Even the architects of the overtime rule understand this. Jared Bernstein, former chief economic adviser to Vice President Biden, wrote an influential paper last year calling for the administration to expand overtime eligibility. The report drove the administration’s decision to promulgate these regulations.

However, Bernstein candidly admits these regulations won’t raise pay. As he puts it: “The costs of increased [overtime] coverage would ultimately be borne by workers as employers set base wages taking expected overtime pay into account.”

Yet President Obama and Labor Secretary Thomas Perez are arguing the new regulations will provide a $1 billion raise for American workers. They won’t. Worse, the new overtime regulations will make juggling work and family life harder for millions of salaried employees.

Many employees prefer being overtime-exempt. It means they don’t have to track their hours—and have more flexibility over when and where they work. Exempt salaried employees can take off work early in the afternoon to be with family, and then make up the work later when their kids are sleep. All they have to worry about is getting their work done—not when or where they do it.

Increasingly technology enables Americans to telecommute. About 3 million employees primarily telecommute to work, and over 15 million more telecommute at least once a month. (These numbers exclude the self-employed). The flexibility of working from home makes it a lot easier for working parents to fulfill their obligations as employees and as parents.

Overtime-eligible employees have much less freedom over when and where they work. They must log their hours. Even if they don’t work overtime, they need to prove it. Their employers risk lawsuits if they don’t. Trial lawyers filed 8,000 federal Fair Labor Standards Act lawsuits last year.

So employers often forbid overtime-eligible employees from working remotely—much less telecommuting. Instead they must clock in and clock out on schedule so their firm can precisely calculate their overtime liability. As a Pitney Bowes spokesman explained to reporters, the firm denied overtime eligible workers’ requests to work from home because “you just don’t take the (legal) risk.”

That defuses lawsuits, but it also deprives overtime-eligible employees of flexibility to balance work and family lives. The administrations’ proposal will effectively convert 5 million professional employees into hourly workers. They will lose flexibility at work without getting paid any more. So much for helping middle-class families.