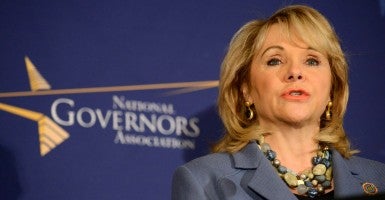 Although the Oklahoma Supreme Court ruled last month that the state Capitol’s Ten Commandments monument must be removed from the Capitol grounds, Oklahoma Gov. Mary Fallin said on Tuesday the monument will remain intact.

Attorney General Scott Pruitt has requested the state Supreme Court rehear the case. Immediately after the initial court ruling last month, both Fallin and Pruitt made it clear they would request a rehearing and attempt to overturn the verdict.

“Oklahoma is a state where we respect the rule of law, and we will not ignore the state courts or their decisions,” Fallin said. “However, we are also a state with three co-equal branches of government.”

Originally, the case was filed by four plaintiffs from the American Civil Liberties Union (ACLU) of Oklahoma. They claimed the monument violated the Oklahoma State constitution, which prohibits public funding or property to go toward supporting a particular sect of religion, according to Article II, Section 5 of the constitution.

The state Supreme Court initially ruled by a 7-2 margin that the monument was unconstitutional, based on the grounds that it is “obviously religious in nature and … an integral part of the Jewish and Christian faiths.” Because of this, the court said the monument defied separation of church and state.

“Quite simply, the Oklahoma Supreme Court got it wrong,” Pruitt said in a statement last month. “The court completely ignored the profound historical impact of the Ten Commandments on the foundation of Western Law.”

Fallin, noting the monument was paid with private funds, said it was analogous to Christmas lights that are displayed at the Capitol.

“Celebrating the historical importance of religions and religious values is not a new idea. Our nation is steeped in references to God and the rights He bestows on all men and women,” Fallin said in a statement. She added, “None of these represent state endorsement of or support for any religion. They are celebrations or visual representations of our culture and events of historical importance.”

Lawmakers additionally have proposed legislation to allow the people of Oklahoma to vote on whether Article II, Section 5 of the constitution should be eliminated. As a result, the monument will remain intact as the state appeals the court’s decision and the legislature considers the proposed changes to the state constitution.