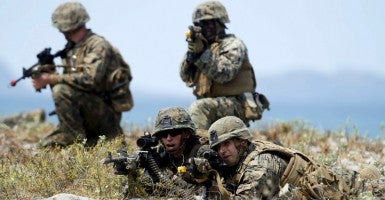 Today, the Army is announcing that it is cutting another 40,000 soldiers, leaving the United States with an Army that is smaller than before Sept. 11, 2001.

However the cuts themselves aren’t news—Army leaders have been forecasting this cut for years due to the dramatic budget cuts they are facing.

What Americans should be worried about is how these cuts continue to weaken our national security.

While the Army is cutting their personnel, it is also dangerously untrained and unprepared for conflict.

In March, Gen. Ray Odierno, Chief of Staff of the Army, testified to Congress saying, “the unrelenting budget impasse has compelled us to degrade readiness to historically low levels.”

He went on to say that only one third of U.S. Army brigades are ready for combat today.

Because of these cuts to readiness and force structure, Odierno concluded that the Army can no longer execute the strategy for defending America.

The cuts to their personnel and training have been too deep, and it appears that the cuts will continue.

The Army is facing these dramatic reductions to force structure and readiness for one reason—budget cuts.

If you include Overseas Contingency Operations funding, the Army budget has gone down by 41.8 percent since 2011.

These cuts are worse than the overall cuts to the national security budget, which went down 15 percent during the same period.

Today’s announcement details how and where the Army plans to cut 40,000 soldiers.

After these cuts are completed, the Army will be reduced to approximately 30 Brigade Combat Teams (BCTs), 20 BCTs short of Heritage’s assessed minimum needed to keep the United States safe and secure.

The cuts have not been limited to Army personnel and training. Programs to modernize the Army have been slashed by 25 percent.

These important programs would have developed things like new infantry fighting vehicles and scout helicopters but have now been purged.

The Army’s future hangs in a delicate balance. Even if this 40,000 soldier cut is implemented, the Army budget situation is grim.

Gen. Odierno testified that, “in order for [this budget] to work, all of our proposed reforms in pay and compensation must be approved. All of our force structure reforms must be supported … we potentially face a $12 billion shortfall in our budget. If [Budget Control Act spending] caps remain, that adds another $6 billion in potential problems.”

More budget cuts could be in the works for the Army. If Congress and the president leave the national security spending caps in place the “tenuous house of cards” Odierno described will be severely threatened. Already unable to execute the Defense Strategic Guidance, sequestration would “compel us to reduce end strength even further.”

Given the threats facing the United States, now is not the time to divest our military capability and capacity.

Instead, Congress and the president should prevent these Army cuts and other debilitating cuts to our military.

The world is not getting safer, so the United States should not be naively cutting our ability to protect ourselves.