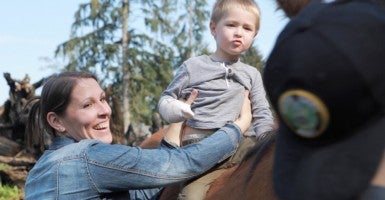 A fundraising campaign that was launched to help Aaron and Melissa Klein, the bakers fined $135,000 for refusing to bake a cake for a same-sex wedding, has raised more than $210,000.

The Kleins told The Daily Signal in an earlier interview that their income has virtually been cut in half since they were forced to close their business as a result. Additionally, if the family is required to pay the fine, their financial situation will become increasingly tighter.

To make ends meet, Aaron Klein has picked up a job as a garbage collector.

But in the past week as the Kleins have made national headlines, contributions have been streaming in steadily. Currently, more than $210,000 have been raised for the family on website Continue to Give—exceeding the initial $150,000 goal. The web page has been shared over 14,000 times on various social media outlets.

Administrative Law Judge Alan McCullough, who works for the Oregon Bureau of Labor and Industries, recommended in April that the Kleins pay a fine of $135,000 dollars—$75,000 to one of the brides, Rachel, and $60,000 to her partner, Laurel. The fine was upheld in a July ruling.

The amount of the fine was established because the lesbian couple submitted a list of alleged physical, emotional and mental damages they encountered as a result of the Kleins’ actions. The list includes symptoms such as “excessive sleep,” “weight gain,” “worry” and “pale and sick at home after work.”

Originally, the fundraiser was started on GoFundMe in April 2015. Upon raising more than $100,000, the fundraiser was shut down by the site and consequently, GoFundMe changed their policies to prohibit “campaigns in defense of formal charges or claims of heinous crimes, violent, hateful, sexual or discriminatory acts.”

The contributions will go toward the Kleins’ everyday expenses and any emergencies they may encounter.

This article originally misidentified ““Every American should be free to live and work according to their faith without the government punishing them for doing so,” as the mission statement of  Continue to Give. It is not, but is a statement on the Kleins’ fundraising page.