Poverty Isn’t the Root Cause of Jihadist Terrorism. Here’s What Is. 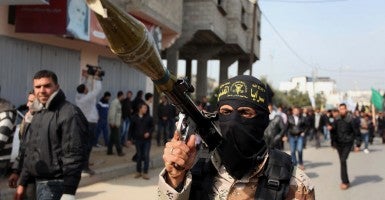 What is the best way for America to combat terrorism?

That question is bound to loom large as we enter the next presidential race.

Yet a coherent answer has not yet emerged because there is confusion over exactly what terrorism is.

In my essay “Understanding Tyranny and Terror: From the French Revolution to Modern Islamism“, I argue that terrorists must be understood as motivated by a utopian vision that seeks to impose, by force, a monolithic collective in which all individual liberties are erased.

This is nothing new, and first began with the Jacobin Terror of 1793 and continued through Bolshevism, Nazism, Maoism, and the Khmer Rouge.

Today it can be seen within the international Jihad.

Poverty and lack of opportunity are not the “root causes” of terrorism.

In fact, many terrorists come from affluent backgrounds or already live in liberal democracies with their widespread opportunities.

Rather, terrorists are revolutionaries inspired by the vision of a coming collectivist paradise that will annihilate the allegedly corrupt, materialistic West.

The most important lesson to keep in mind is that terrorists are tyrants in waiting.

Three kinds of tyranny have emerged throughout history and still exist today.

The oldest and still the most widespread are garden-variety kleptocracies, in which a single ruler exploits an entire society as if it were his private property (think Bashar al-Assad).

The second kind is the tyrant as reformer—men like Julius Caesar, or Napoleon, who seek glory through benefiting their peoples.

The third type I call millenarian.

This type began with the Jacobin Terror of the French Revolution in 1793, and its goal was to impose a blueprint according to which all privilege and alienation would be eradicated by a totalitarian monolith.

Initially, the French Revolution aimed to extend political liberty and limited government to France, in line with the American Revolution.

But it was eventually hijacked by the Jacobins, who wanted to return to Jean-Jacques Rousseau’s Golden Age of pure collective equality without private possessions or individual self-interest.

This was the first millenarian tyranny, a club begun by Robespierre and later to include Stalin, Hitler, Mao, Pol Pot and today’s Jihadists.

While these millenarian revolutions have varied, they share broad structural features that are found today in Jihadist terrorism.

They all aimed to return to a state of moral and political purity, or the “Year One,” as the Jacobins called it.

In the Islamists’ version today, they seek to return to an allegedly pure original version of Islam from the seventh century.

Because the past to which such movements are allegedly returning is so distant and bears so little resemblance to received traditions, all former hallmarks of government, custom and culture must be completely destroyed.

Another distinguishing trait of these millenarian movements is that a class or racial enemy standing in the way of their paradise must be exterminated before the shining new world of the future can come into being.

For the Jacobins, it was the royalists; for Stalin, the kulaks, the so-called rich peasants; for Hitler, it was the Jews, and for today’s Jihadists is it is the Great Satan America and its local proxy the Little Satan Israel, along with Christians and insufficiently pure Muslims.

All tyrannies have killed those who opposed them.

Only millenarian tyrannies kill entire classes of people simply for existing, whether they oppose them or not.

Islamist ideologues like the Iranian Ali Shariati tried to hitch a millenarian strain in Islam to the service of real-world revolution.

But, as I show, their visions are far more directly shaped by radical thinkers of the far left and right including Karl Marx, Friedrich Nietzsche, Martin Heidegger and Jean-Paul Sartre than by any traditional version of the Muslim faith.

The utopian vision is what counts. The very term “terrorist” can mislead one into thinking that it is a mere psychological aberration unconnected to any long-term political project.

In reality, like Marxists and Fascists in the past, Jihadists are in for the long haul as they seek to transform the world through war and violence.

For America, this will involve some complicated choices among the lesser of evils.

Should we support toppling garden variety tyrants like Hosni Mubarak or Bashar al-Assad when it might increase the likelihood of a full-blown Islamist millenarian regime filling the political vacuum?

Democratization should be encouraged, but tempered by the realization that a less than perfectly democratic regime may be preferable to a totalitarian successor.

These are not pleasant choices, but they will be unavoidable for the next American president.