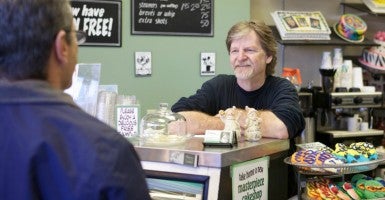 The owner of a family business that makes custom cakes today asked a Colorado appeals court to strike down state rulings that he discriminated against a same-sex couple by declining to provide a cake to celebrate their wedding.

“People shouldn’t be forced to choose between earning a living and exercising their fundamental rights.”—@AllianceDefend’s Jeremy Tedesco

Lawyers for “cake artist” Jack Phillips argued that compelling the suburban Denver baker to express his artistic talents in connection with the 2012 wedding of two men would violate his First Amendment rights not only to freedom of religion but also free speech or expression.

“The gist is that one side … is defending the First Amendment rights of artists like Jack Phillips to create expressions consistent with his beliefs and to avoid creating expressions that violate his belief,” Jeremy Tedesco, senior legal counsel with Alliance Defending Freedom, told The Daily Signal after representing Phillips at the hearing.

“The other side of the case thinks there are no First Amendment rights in the commercial context and once you open a business, you cede all First Amendment protections.”

>>> Commentary: On Marriage, What Do We Do Now?

Lawyers for Charlie Craig and David Mullins, who were to marry in Massachusetts but wanted to buy a custom cake to celebrate upon their return to Colorado, said Phillips’ business, Masterpiece Cakeshop, discriminated against them by turning down their order.

“Religious beliefs do not put the cake shop above the law,” Ria Mar, a lawyer representing the couple for the state chapter of the American Civil Liberties Union, argued in the hearing.

Craig and Mullins filed a complaint with the Colorado Civil Rights Division.

“Religious beliefs do not put the cake shop above the law.”—@ACLUofColorado

The state agency ordered Phillips to change store policy against making cakes for same-sex weddings or be subject to fines. Since the rulings, his 22-year-old shop in Lakewood, Colo., has stopped making wedding cakes.

The state ACLU chapter, which has publicized the case, did not respond to a request for comment by The Daily Signal. The state Attorney General’s Office, which represented the state agencies, referred reporters to the ACLU for comment.

The three-judge appeals court is expected to rule within several months in the case, which ultimately could head not only to Colorado’s highest court but to the U.S. Supreme Court.

While we all agree that religious freedom is important, no one’s religious beliefs make it acceptable to break the law by discriminating against prospective customers. No one is asking Masterpiece’s owner to change his beliefs, but treating gay people differently because of who they are is discrimination plain and simple.

In the interview with The Daily Signal, Tedesco said:

The judges’ questions certainly revealed their concerns with the First Amendment ramifications of the case, and a concern with the scope of the ACLU’s and the state’s argument. People shouldn’t be forced to choose between earning a living and exercising their fundamental rights, but that’s what the state and the ACLU are saying in this case.

When one judge asked whether an oil painter had to create a painting celebrating same-sex marriage, an ACLU lawyer replied yes, Tedesco noted.

“And if they don’t want to have to do that, then they can close down their business and just paint on the side.”

The hearing comes 11 days after the U.S. Supreme Court legalized same-sex marriage across the nation.

>>> Commentary: How to Preserve Religious Freedom After Supreme Court’s Ruling

The case tests the scope of First Amendment protections that federal courts, especially the Supreme Court, have upheld for free expression in the visual arts and entertainment.

Rather than solely argue Phillips’ right to exercise his Christian religion as a businessman, his lawyers hold that the government can’t force him or his staff to exercise their artistic gifts in a way that violates their faith.

Phillips has said he willingly serves all sorts of customers, including gays and lesbians, but could not in good conscience create a cake especially for the wedding of Craig and  Mullins.

He said he offered to make any other kind of cake for them, for any other event. The couple went to another shop and successfully ordered a cake with a rainbow theme to symbolize their union.

Tedesco noted that Alliance Defending Freedom recently supported the right of three other Colorado bakers to refuse to make a custom cake for a Christian who asked for it to express his opposition to same-sex marriage. In those cases, the state ruled against the customer.

Craig and Mullins, holding hands, sat at one side of the courtroom during arguments, the Associated Press reported. Phillips, who sat near his attorneys, told reporters afterward that he doesn’t regret his decision not to bake the cake.

>>> Related: How Religious Business Owners Could Protect Themselves After Supreme Court’s Marriage Decision