The Federal Reserve Hasn’t Reduced Frequency of Recessions. Why Is It Necessary Again? 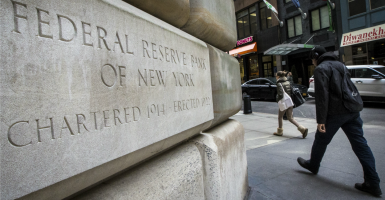 In two months the Federal Reserve Bank of Kansas City will hold its annual symposium in Jackson Hole, Wyoming. It is here that, for more than 30 years, “participants from across the globe gather … to discuss important policy issues of mutual interest.”

In 2012, Fed Chairman Ben Bernanke kicked off the conference by reviewing “the evolution of U.S. monetary policy since late 2007.”

While these short-term evaluations are certainly useful, can’t we do a little better? The Fed’s been around since 1913. Isn’t its long-term track record more important than its post-crisis performance?

Some people certainly think so, and they’ll be holding their own conference in Jackson Hole, just down the road from the Fed’s gathering. Sponsored by the American Principles Project, this conference’s theme is “Central Banks: The Problem or the Solution?”

It’s certainly a valid question. The Federal Reserve is nothing like the central bank that was created in 1913, and overall it has not increased economic stability relative to the pre-Fed era.

It’s true that recessions were more frequent in the pre-World War I era than in the post-World War II period, but this comparison omits roughly 30 years that included the Great Depression. When the entire Federal Reserve period is compared to the full pre-Fed period, the frequency of recessions has not decreased.

Even when you exclude the interwar period and throw out the Great Depression, the Fed’s track record still isn’t as great as central bankers would have us believe.

For instance, the average length of recessions, as well as the average time to recover from recessions, has been slightly longer in the post-World War II era than in the pre-Fed era.

Yet, even people who tend to shun economic centralization have no problem at all supporting a central bank. To some extent this debate was hashed out prior to the Fed’s founding, but the debate is no longer simply theoretical.

We now have 100 years of experience with our central bank against a backdrop of Keynesian-style government management of the economy. The original impetus was simply to provide a central method for stemming currency shortages, but the Fed has become something very different—at least partly because it’s a government agency.

Many serious scholars have dedicated their life to this topic, but the debate over the proper role of a central bank rarely takes place outside of this group. In the typical graduate school, even monetary economists take the necessity of a central bank for granted.

So it’s encouraging that monetary policy reform ideas are gaining more ground in Washington than ever.

Rep. Kevin Brady, R-Texas, has just reintroduced legislation to create a National Monetary Commission. Such a commission would be the perfect vehicle for publicly assessing the Fed’s overall performance and implementing the best long-term monetary policy reforms.

Permanently moving the U.S. toward a truly competitive monetary system—one that’s wholly compatible with free enterprise—should be part of the national debate. But it’s unlikely to gain the public’s attention without some sort of formal congressional commission.

This list is likely far from comprehensive, and nothing should be banished from debate, not even the gold standard, a system incorrectly criticized for at least a century.

In 1985, Nobel Prize winning economist F.A. Hayek suggested (around the 2:50 mark) the best reform approach was to let private firms issue competing money and allow people to choose which moneys they prefer to use.

Allowing people to hold and use the money they prefer will not solve all economic problems but neither will legal restrictions and government monopoly. As with any privately produced good, inferior forms of money should not be expected to replace an economy’s preferred medium of exchange.

A moderate view, therefore, is that the Fed should not be shielded from competition against alternative monies.

That’s what policymakers should be debating in Jackson Hole. And depending on which conference we’re talking about, some of them will be doing exactly that.