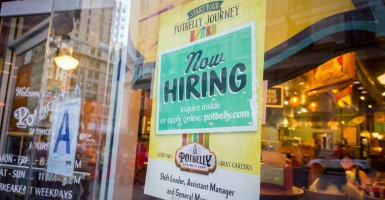 Today’s Bureau of Labor Statistics’ jobs report showed solid but not spectacular labor market growth in June. The payroll survey showed net employment jumping by 223,000 jobs while the household survey reported unemployment falling to 5.3 percent—a drop entirely driven by falling labor force participation. A smaller proportion of Americans are working or looking for work now than at any point since 1977.

A smaller proportion of Americans are working or looking for work now than at any point since 1977.

The household survey reported than unemployment dropped by 0.2 percentage points in June, dropping to a new post-recession low of 5.3 percent. However, unemployment fell only because 640,000 Americans left the labor market in June. Individuals neither working nor looking for work do not count as unemployed. As a result labor force participation in the adult population dropped 0.3 percentage points to 62.6 percent—the lowest level in 38 years.

Demographics can partly explain this drop. The baby-boom generation is ageing and beginning to retire. Older Americans work at lower rates than younger Americans. However, an ageing population can only explain part of this drop. The labor force participation rate of prime-aged Americans (25-54 year olds) also dropped 0.2 percentage points to 80.8 percent in June. With the exception of last September, prime-age labor force participation has not fallen below this level since 1984.

The economy has improved dramatically since the depths of the recession, but the labor market has not fully recovered. The June job numbers are good enough to ease fears of a new recession, but not great for those seeking work.