22 Inspiring Quotes About What It Means to Be an American 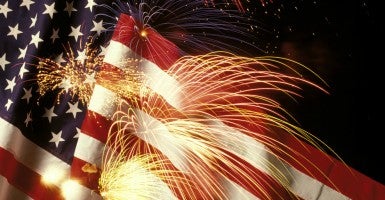 At the time we are celebrating our nation’s independence, many Americans reflect on the distinctive values that contribute to our unique national character. What do the stars and stripes truly stand for?

This Fourth of July, in between family barbecues and watching fireworks, take a moment to consider these inspiring patriotic quotes about what it means to be an American.

1. “We are called the nation of inventors. And we are. We could still claim that title and wear its loftiest honors if we had stopped with the first thing we ever invented, which was human liberty.”

2. “America was not built on fear. America was built on courage, on imagination and an unbeatable determination to do the job at hand.”

3. “There is much more to being a patriot and a citizen than reciting the pledge or raising a flag.”

4. “This nation will remain the land of the free only so long as it is the home of the brave.”

5. “America is another name for opportunity. Our whole history appears like a last effort of divine providence on behalf of the human race.”

6. “There is nothing wrong with America that cannot be cured by what is right with America.”

7. “Let every nation know, whether it wishes us well or ill, that we shall pay any price, bear any burden, meet any hardship, support any friend, oppose any foe in order to assure the survival and the success of liberty.”

8. “Wars may be fought with weapons, but they are won by men. It is the spirit of men who follow and of the man who leads that gains the victory.”

9. “A patriot must always be ready to defend his country against his government.”

10. “Is life so dear, or peace so sweet, as to be purchased at the price of chains and slavery? Forbid it, Almighty God! I know not what course others may take; but as for me, give me liberty or give me death!”

11. “The way to secure liberty is to place it in the people’s hands, that is, to give them the power at all times to defend it in the legislature and in the courts of justice.”

12. “Loyalty to country ALWAYS. Loyalty to government, when it deserves it.”

14. “If ever a time should come, when vain and aspiring men shall possess the highest seats in Government, our country will stand in need of its experienced patriots to prevent its ruin.”

15. “They that can give up essential liberty to obtain a little temporary safety deserve neither liberty nor safety.”

16. “This nation, under God, shall have a new birth of freedom; and that government of the people, by the people, for the people, shall not perish from the earth.”

17. “We are one people, all of us pledging allegiance to the stars and stripes, all of us defending the United States of America.”

19. “What is the essence of America? Finding and maintaining that perfect, delicate balance between freedom ‘to’ and freedom ‘from’.”

20. “Posterity: you will never know how much it has cost the present generation to preserve your freedom. I hope you will make good use of it.”

21. “Freedom is never more than one generation away from extinction. We didn’t pass it to our children in the bloodstream. It must be fought for, protected, and handed on for them to do the same, or one day we will spend our sunset years telling our children and our children’s children what it was once like in the United States where men were free.”

22. “I only regret that I have but one life to lose for my country.”