Torn By War and Terror, This Syrian Minority Group Is Struggling to Survive 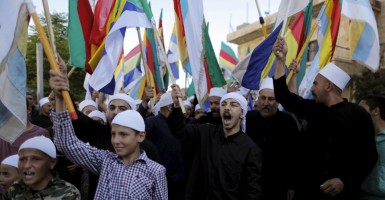 Members of the Druze community wave flags during a protest in the Druze village of Majdal Shams on the Golan Heights, June 15, 2015. (Photo: Ammar Awad/Reuters/Newscom)

The Druze minority sect in Syria is facing a high-stakes game of survival in the complex web of alliances driving the country’s brutal civil war.

How this persecuted minority group will navigate current security and political crossroads could determine their ultimate fate in Syria.

The danger to the Druze has also become a thorn in the side of neighboring Israel, a country attempting to maintain its neutral position on the Syrian civil war. How the Israeli government can still appease its own small minority Druze population remains a significant hurdle.

Who Are the Druze?

The Druze are an esoteric religious sect that broke away from Shi’ite Islam in the 11th century.

The group draws on elements from all of the monotheistic faiths, as well as the teaching of Greek philosophers including Aristotle and Socrates.

They follow theophany and reincarnation and are considered to be infidels by Sunni Islam extremist groups, particularly those engaged in the heaviest fighting in the Syrian civil war such as Jabat al-Nusra (Syrian al-Qaeda affiliate) and the Islamic State in Iraq and Syria (ISIS).

Today, there are about 1.5 million Druze worldwide, two-thirds of which live in Syria, and the other one-third can be found in areas of Israel, Jordan, and Lebanon. Map by Kelsey Lucas/Visualsey for The Daily Signal

The Druze have historically experienced intense persecution in the Levant, while the Druze in Israel considered their relationship to Israeli Jews as a “covenant of blood” given their similar historical experiences.

In an effort to avoid division and persecution, the Druze frequently pledge intense loyalty to the ruling regimes or governments of the countries in which they live. The Druze in Syria are most often linked to the Bashar al-Assad regime, while many of their brethren in Israel are Israeli citizens and some even serve in combat units in the Israeli Defense Forces (IDF).

The same type of Druze relationship with the host government is true in Lebanon and Jordan. While these generalizations remain relatively consistent throughout the region, the nature of the conflict in Syria is forcing a re-calculation of their current allegiances.

Earlier this month Jabat al-Nusra, the al-Qaeda affiliated terrorist group, killed some 20 members of the Druze sect in Qalb Loze in Idilb province near the Turkish border.

The event ignited protests and fear amongst the Druze communities living elsewhere in Syria—particularly those residing in their ancestral homeland Druze Mountain in Sweida province—and amongst their brethren in Lebanon and Israel.

Increasing calls by the Druze for action by Israel cannot be dismissed.

The Druze living in Israel, while only making up 1.5 percent of the overall Israeli population, hold significant political and military clout given their high-level positions within both the government and the Israel Defense Forces.

While many Druze have defected from Syrian forces or refused to serve under the auspices of neutrality, many, like other minority sects including the Alawites and the Christians, have traditionally supported the Assad regime.

However, this support found amongst many in the Druze community in Syria has been significantly strained in recent months due to the conscription of young men and forcing them to fight far from their home territory. In addition, many within the Druze community saw the attack by Jabat al-Nusra in Idlib province as a clear example of the weakness of the Assad forces and the erosion of their effectiveness.

According to the pro-opposition group, Syrian Observatory for Human Rights, Jabat al-Nusra in recent months dug up historic Druze graves and destroyed shrines in Qalb Loze and other Druze villages in Idlib province.

Further south in Sweida, home to the largest Druze population in Syria, allegiances are just as complicated. Though many of the Druze are trying to avoid aligning themselves with pro-government forces, they are also trying to avoid allegiances with rebel militias that could eventually fall under extremist control.

In 2013, a group of Druze in Sweida called the Sultan Pasha al-Atrash Battalion—which helped local neighboring Islamist groups in Deraa alongside the Free Syrian Army—was ultimately overrun by the Sharia Commission of Jabat al-Nusra resulting in the killing of several Druze.

The Druze in Sweida have also gotten caught between pro and anti-government stances where they became entangled in a game of tit-for-tat kidnappings in which several Druze leaders were captured by Jabat al-Nusra and killed.

The primary strategy of the Druze in the war thus far has been self-preservation with a strong dose of neutrality. The efforts to adhere to this approach remain clearly evident in Sweida and have resulted in relative peace. This has allowed the community to play an important role as a safe haven for refugees, particularly for those caught between the fighting in Deraa.

Sweida has also served as a key humanitarian aid corridor for various populations in the region.

The Druze, against the odds in war-torn Syria, have created a small island of stability in the midst of a country vaporized by conflict and chaos. Yet, given the current trajectory of the conflict, this stability is unlikely to last much longer.

The Druze are keenly aware that their options for effective self-defense are limited. In light of the plight of the Syrian Druze, many in Israel are pressuring the Israel Defense Forces to provide additional humanitarian as well as lethal aid to the Syrian Druze communities across the Israel-Syria border. However, there are some Druze on the Syrian side who view such efforts with suspicion, claiming Israel would use the Druze as a buffer zone for geopolitical advantage in the future.

At the same time, the Israeli government has come under criticism from the Druze in Israel for the government’s indiscriminate humanitarian support during Syria’s war.

For example, an Israeli field hospital in the Golan Heights serves Syria’s war wounded under a “no questions asked policy.”

The Druze claim Israel is treating Jabat al-Nusra fighters and enabling them to return to the battlefield. The tense situation in the Golan Heights culminated just days ago when a mob of Israeli Druze attacked a military ambulance carrying Syrians wounded in the fighting.

One of the Syrians being transported was killed and another critically injured.

In addition, a Druze leader in Lebanon, Walid Jumblatt, has called for the Druze to support Jabat al-Nusra, a policy many Druze in Syria are refusing to accept given the recent attack in Idlib.

The Druze have developed into fierce fighters, a characteristic many attribute to enduring centuries of persecution and their ability to survive in both anti- and pro-government held areas in Syria.

But as the war rages on and the country’s moderate voices become ravaged by both Assad and groups such as ISIS and Jabat al-Nusra, the self-preservation through neutrality approach will be harder for the Druze to maintain, particularly if Jabat al-Nusra or an allied force gains full control of Sweida.

Despite Jabat al-Nusra’s previous claim during an interview with Al Jazeera that the group would not harm the Druze, actions speak louder than words in this region and the Druze will likely face a similar fate as the Yazidis and Christians who faced a massacre by ISIS.

The possibility of support from Israel, however slim it may be, might be the Druzes’ only hope.