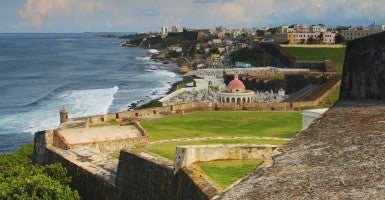 Public employees get 30 vacation days a year. Anyone who works over eight hours in a day gets paid time-and-a-half. Employees have strong rights.

The minimum wage is high: 77 percent of the median wage.

Environmental regulations are settled beyond the pressure of local economic interests. The forests and mountains are pristine destinations for ecotourism.

Union jobs in shipping are protected from outsourcing to cut-rate foreign competitors.

The social safety net is buoyant and provides a solid working-class standard of living. People who are injured can rely on disability insurance to maintain their income.

Student-to-teacher ratios are very low so that every child gets the very best.

The flagship research institution is a well-funded public university. Just ten years ago, the university was linked to downtown and the suburbs by a new light rail line.

Best of all, richer people living far away pay most of the taxes. This little paradise has open access to large export markets and is part of a major currency union.

The government borrows at low interest rates and runs large deficits when output is below trend and does not give up on stimulus after a few years.

But economic output, oddly, is always below trend.

Puerto Ricans have lived through decades of this left-wing utopia, and they are fleeing it.

The island’s working-age population declined by 100,000 since 2005, as the economy shifted from stagnation to depression.

In a parallel universe with free markets and low regulation, Puerto Rico could have become the Singapore of the Caribbean.

It has a sizable educated, bilingual workforce, is a natural hub for regional commerce, and has free access to U.S. markets.

Credit must be given to left-wing Gov. Alejandro García Padilla for commissioning an independent economic report on Puerto Rico’s economy, and his administration did not repudiate the economists’ blistering critique of the commonwealth’s progressive policies and shabby governance.

Krueger, who will present her research at The Heritage Foundation on July 8th, argues that fiscal stimulus by successive Puerto Rican administrations failed to end the stagnation because it was based on a misdiagnosis.

“Solving Puerto Rico’s problems through fiscal expansion has not worked,” she writes, “and will not work.”

Instead, spending cuts that reduce the footprint of government can return the commonwealth to solvency and allow economic growth. Their suggestions include:

Governor Padilla’s administration has called for a new sales tax, which the authors estimate would raise $1 billion annually.

However, many European countries can now attest that raising taxes during a crisis is a recipe for slower growth and lower revenues.

The largest potential revenue gains come from reforms to the labor market and business sector rather than from tax increases.

By spurring economic growth, Puerto Rico could add $1.35 billion in revenues without a tax increase.

Tax reforms and spending policies will not be sufficient without reforms to Puerto Rico’s social safety net.

By using a welfare system designed for the mainland U.S., where average wages are much higher, both federal and Puerto Rican policies discourage work.

The U.S. minimum wage of $7.25 is only slightly lower than the median wage in Puerto Rico, $9.42. Contrary to the claims of some progressives, a higher minimum wage destroys jobs.

But only the U.S. Congress can grant Puerto Rico a minimum wage exemption.

The economists recommend Puerto Rico repeal its European-style labor laws, which make it difficult to lay workers off, expensive to employ them, and thus risky to hire them.

Reforms of the benefits Puerto Ricans receive when they are not at work are important as well.

The economists show in one estimate that “a household of three eligible for food stamps, AFDC, Medicaid and utilities subsidies could receive $1,743 per month—as compared to a minimum wage earner’s take-home earnings of $1,159.”

Since the minimum and median wages are so close, the welfare income would also exceed a median wage earner’s income by about $240 a month.

The authors conclude that the “federal government should therefore give the Commonwealth more latitude to adjust welfare requirements and benefits.”

It would then be up to Puerto Rico’s lawmakers to administer transfer payments in less distortionary ways.

One barrier to business is the Merchant Marine Jones Act, which gives a monopoly on trade between Puerto Rico and the U.S. to a small fleet of old, inefficient vessels.

In particular, Puerto Rico has been shut out of the energy boom on the mainland.

But lack of access to mainland gas and oil is not the only reason energy prices are so high in Puerto Rico.

The report notes that only in insolvency is the Puerto Rican electrical utility beginning to address its “over-staffing and inefficiency,” which have kept electricity prices high.

They recommend assigning a “high-level official” in the Puerto Rican government to improving the island’s “ease of doing business ranking.”

Their hope is that someone whose reputation is on the line will have the willpower to break through the bureaucratic inertia and enact reforms on registering property and permitting new businesses.

Beyond the content of Puerto Rico’s policies, Krueger and her team were clearly troubled by the opacity of the commonwealth’s civil service.

Their immediate problem was a lack of accurate, up-to-date economic data. But the data deficiencies reflected generally chaotic record-keeping and poor coordination throughout the central bureaucracy.

Puerto Rico’s progressive policies are not a coincidence. President Franklin Roosevelt appointed Rexford Tugwell, one of his most progressive lieutenants, governor of Puerto Rico in 1941.

Tugwell created a unique stream of tax revenue and used it to experiment with a centrally planned economy, extending the reach of the government of Puerto Rico into every sector of the economy.

Stricken and stunted by the plans of Tugwell and his successors, Puerto Rico has never lived up to its promise as an American commonwealth.

Now in a depression and a debt crisis, Puerto Rico serves as a warning against the very policies that Tugwell championed.