An End to Colleges’ Racial Discrimination in Admissions? 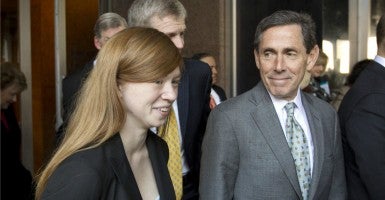 The U.S. Supreme Court has an opportunity to finally get rid of racial discrimination in college admissions.

The court agreed this week to review, for a second time, Abigail Fisher’s case against the University of Texas at Austin in its new term this fall.

This comes at a time when racial preferences in college admissions, practiced by universities across the county, are under fire.

Several new lawsuits are making their way up through the lower courts challenging the use of preferences at Harvard and the University of North Carolina-Chapel Hill.

And earlier this year, Vijay Chokal-Ingam, brother of famed actress Mindy Kaling, publically criticized the use of racial preferences when he revealed the elaborate scheme he pulled off to get into medical school: He faked being black.

After witnessing his Indian-American friend fall victim to the use of racial preferences in medical school, Chokal-Ingam, also Indian-American, did some research to avoid the same fate.

“I studied the statistics and data made public by the Association of American Medical Colleges and came to a surprising conclusion. The data suggested that an Indian-American with my grades (3.1 GPA) and test scores (31 MCAT) was unlikely to gain admission to medical school, but an African-American with the same grades and test scores had a high probability of admission,” he said.

So he changed his name, shaved his head, joined the University of Chicago’s Organization of Black Students, and pretended to be African-American on his applications. And it worked. He was admitted.

They subject remaining applicants, like Fisher, to a “holistic review” that includes racial preferences for underrepresented minorities.

The university rejected Fisher, and she sued for discriminating against her based on race.

In 2003, in Grutter v. Bollinger, the Supreme Court upheld racial preferences in state school admissions to the extent that they are “narrowly tailored to further compelling governmental interests.”

The court also determined that reaching a “critical mass” of diversity on campus to aid students in “obtaining the educational benefits of diversity” is a compelling interest.

But when the high court decided the Fisher case for the first time in 2013, it held that schools must prove their use of race meets that standard.

The court found that the lower courts had given too much deference to the University of Texas in determining whether its use of race in making admissions decisions was narrowly tailored.

It sent the case back to the lower court, directing it to apply strict scrutiny (the highest level of review) to establish whether it was necessary for the university to use race to achieve a critical mass of diversity.

The justices stressed that the lower court must look at actual evidence and not “simple … assurances of good intention” from the university.

But on remand, the 5th Circuit Court of Appeals ignored the Supreme Court’s instructions and again upheld the school’s plan, even though, as the dissenting judge pointed out, the school provided no evidence that racial preferences were needed to further their interest in “qualitative” diversity.

Fisher appealed to the Supreme Court again, and the court will hear arguments again in its 2015-2016 term.

However, since the 5th Circuit issued its decision, a scandal at the University of Texas has revealed that university officials had another, secret admissions process that they never revealed to the courts.

They regularly overrode their so-called “holistic review” to allow politically-connected individuals, such as state legislators and members of the university’s Board of Regents, to get family members and other friends admitted.

An investigation by Kroll Inc. found that many of these students were admitted “despite grades and test scores substantially below the median for admitted students.”

In 29 percent of the cases Kroll reviewed, “the files suggest that ethnic, racial, and state geographical diversity may have been an important factor,” making race and ethnicity an even more important factor in these “secret” admissions than in the holistic administration process.

The bad faith of the University of Texas in not telling the truth about its admissions policy the first time this case was before the Supreme Court could be an unexpected factor in the court’s reconsideration of the issue.

Racial preferences are nothing less than blatant racial discrimination no matter how “holistic.”

They remain a contentious topic in academia although not in America, where polls show that the public is overwhelmingly against them because they believe admission decisions made by colleges should be based solely on merit. What a concept!

As more people such as Chokal-Ingam speak out about how “affirmative action tends to promote racial resentment and perpetuates negative stereotypes” and how these programs don’t “fully benefit the underprivileged,” the Supreme Court ought to take note.

Hopefully the court will agree with Chokal-Ingam when he tweeted “affirmative action is DISCRIMINATION; it’s a lie to call it [something] else.”