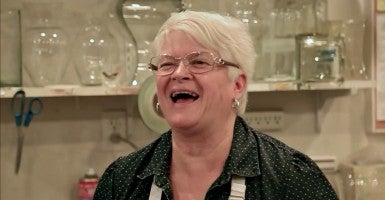 In the wake of the Supreme Court’s decision to legalize gay marriage, conservative lawmakers put forth a plan they claim will protect “many of the millions of Americans who voted to define marriage as an exclusively male-female institution.”

But will that plan protect the Washington florist being sued by the state for acting on her beliefs about marriage? Or the New York farmers being fined $13,000 for refusing to host a same-sex wedding in their backyard?

The answer, quite simply, is no.

“If you are concerned about faith-based adoption agencies shutting down, or bakers and florists and photographers being fined thousands of dollars simply for declining to celebrate a same-sex wedding, then you need to also be concerned about state and local policy,” said Ryan T. Anderson, who researches and writes about marriage and religious liberty at The Heritage Foundation.

In each of these cases, it wasn’t the federal government acting on federal law that brought the burden, it was state and local government.

New federal legislation, which was introduced by Sen. Mike Lee, R-Utah, and Rep. Raul Labrador, R-Idaho, would prohibit federal officials from “discriminating” against an individual or institution for acting on their belief that marriage is a union between one man and one woman.

For example, it could protect religious schools from losing their tax-exempt status if they refused to provide housing for a married same-sex couple.

But those protections, under what’s called the First Amendment Defense Act, would stop at the federal level, leaving business owners still vulnerable to punishment by the state for acting on their beliefs about marriage.

From the Farmers, to the Florist

After being found guilty of violating anti-discrimination laws, both Cynthia and Robert Gifford (the farmers who declined to host a same-sex wedding on their property) and Barronelle Stutzman (the florist who refused to make flower arrangements for a same-sex wedding) faced fines brought by the state.

Currently, more than 20 states have enacted such laws. Many cities and municipalities have adopted their own versions as well. Opponents of providing such protections for gays say the laws can inhibit business owners’ abilities to live out their religion in the workplace.

In the case of the Giffords, the Human Rights Commission of New York ordered them to pay a $10,000 penalty to the state for violating its anti-discrimination law.

The Gifffords also had to pay $1,500 apiece to Melisa Erwin and Jennifer McCarthy, the complainants in the case.

Stutzman, a 70-year-old grandmother, was sued by Washington State Attorney General Bob Ferguson for refusing to make flower arrangements for a gay couple. (The American Civil Liberties Union filed another suit on behalf of the couple, and the suits have since consolidated into Arlene’s Flowers v. Ferguson.)

Stutzman now faces a fine of up to $2,000 for violating Washington’s anti-discrimination law, a separate fine of $7.91 to the couple, and legal fees that her attorney say are already in the seven figures.

She and the Giffords both appealed their guilty verdicts, and their cases are still ongoing.

On that front, Louisiana Gov. Bobby Jindal has taken the lead.

Last month, Jindal quietly issued an executive order that “prevents the state from discriminating against people or their business with deeply held religious beliefs.”

The measure, which was modeled after legislation that failed to pass the Louisiana state legislature, prohibits “all departments, commissions, boards, agencies, and political subdivision of the state” from discriminating against people or businesses with deeply held religious beliefs about marriage.

In defending his executive order, Jindal told The Daily Signal in an earlier interview that there are “actual examples” of states “discriminating against florists and others,” by taking away their basic rights to religious liberty and forcing them to pay “thousands of dollars in fines.”

“Even if you don’t agree with me on the definition of marriage … you still should want those folks to have their rights—our rights to live the way we want,” he said.

Critics say Jindal’s executive order, and ones like it, go too far, enabling businesses to discriminate against same-sex couples.

On the federal level, opponents are expected to make a similar argument as Republicans move forward Lee and Labrador’s First Amendment Defense Act.

“Same-sex couples exercising their constitutional freedom to marry should not be shunned by commercial businesses for any reason,” said Susan Sommer, the director of constitutional litigation for Lambda Legal, a gay rights group.

That sentiment is spreading.

Two days after the Supreme Court’s ruling, a New York Times columnist argued to end tax exemptions for churches and religious schools. A day before the decision, the ACLU renounced support of the Religious Freedom Restoration Act. “[W]e can no longer support the law in its current form,” wrote Louise Melling, deputy legal director of the ACLU for The Washington Post. “[I]t is now often used as a sword to discriminate against women, gay and transgender people and others. Efforts of this nature will likely only increase should the Supreme Court rule—as is expected—that same-sex couples have the freedom to marry.”

“There’s a likelihood that there will be more prosecutions and lawsuits filed against people of faith in respect to marriage in the wake of the Supreme Court decision,” said Doug Wardlow, legal counsel at Alliance Defending Freedom, which is the organization defending Stutzman and the Giffords.

Wardlow said both Lee and Jindal’s efforts are a “good thing” but more is needed on the state level to challenge anti-discrimination laws.

“The Supreme Court did invent a new constitutional right to marriage that includes marriage for same-sex couples, but that should not have an immediate impact on ongoing cases,” Wardlow said.

What that does is fuels the fire for passage of additional [anti-discrimination] statutes and laws that will lead to persecution of people trying to live out their beliefs about marriage, so we need to respond in kind and make sure there are additional protections there to guarantee that our First Amendment rights are protected and respected.