A Space War With China or Russia Is a Real Threat 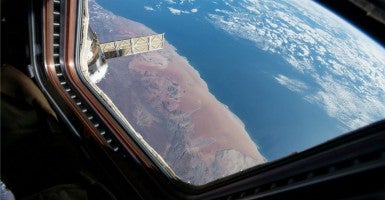 A view of southwestern Africa as seen from the International Space Station. (Photo: N.A.S.A/SIPA/Newscom)

A war in space sounds like a great plot for a summer blockbuster.

Unfortunately, a conflict in space isn’t just a Hollywood movie script anymore, but a threat in the real world.

Both Russia and China have developed, or are developing, the ability to shoot satellites out of space.

In addition to this, a number of other countries are developing ways to harm satellites from the ground using jammers and lasers.

Lieutenant General John Raymond, who is in charge of U.S. military space operations, told Congress earlier this year that the Chinese have tested anti-satellite weapons twice in the past two years and that the Russians have a previously undeclared microsatellite in space, which some believe to be a space weapon.

America’s potential adversaries are developing these capabilities because they’ve realized how incredibly vital space is, as a tool, for the U.S. armed forces and intelligence agencies.

Satellite communications allow our troops to be able to operate anywhere in the world, and can range from simple text messages, to nuclear command and control.

GPS is able to provide precise location and timing for cruise missile launches, as well as enable close air support to troops on the front line. Intelligence and surveillance satellites provide imagery and technical intelligence including missile warnings.

This week, The New York Times editorial page discussed preventing a war in space. Regrettably, their proposal is predictable and not particularly helpful (calling for more diplomacy).

In “Preventing a Space War,” the argument is made for developing some sort of international treaty. This op-ed rightly notes, that China and Russia have proposed a legally binding ban on space weapons.

These proposals come, however, as both are developing weapons that could be used in a space conflict. Despite China and Russia’s space weapon development, some in the State Department seem to be interested in pursuing a space arms control treaty.

Diplomacy always plays a role in preventing conflicts, but with the actions of the Chinese and the Russians, the U.S. must now focus on deterrence and defense—in addition to continued diplomatic pressure.

The United States must be able to protect its vital space systems, which many Americans depend on for everyday life.

Diplomacy alone is unlikely to prevent an attack on U.S. space assets and will only make the United States more vulnerable. If deterrence fails, the U.S. must be able to restore its space capabilities—and preserve a strong military option to stop the threat.

The U.S. must make it clear that an attack on American satellites will be treated the same as an attack on other American equipment such as ships, planes, or bases.

There must be no doubt in the minds of our potential adversaries on our commitment to respond to an attack in space to U.S. property.

The United States can strengthen deterrence in space by taking steps to complicate potential adversarial attacks.

The president and military must have a full awareness of what is happening in space, along with an ability to rapidly reposition our satellites, if needed, to avoid threats.

The U.S. should also consider providing defensive capabilities to its critical satellites.

Diplomacy alone is not a sufficient response to the rising threats in space.

If China or Russia believe that they can win a war in space, treaties will do little to prevent their continued investment in space weapons.

In order to maintain peace in space the United States must project strength through deterrence, while continuing its use of diplomacy.