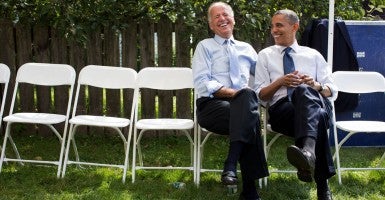 “What we’re not going to do is unravel what has now been woven into the fabric of America,” President Obama said in response to the Supreme Court's Obamacare ruling. (Photo: UPPA/Zuma Press/Newscom)

Yesterday was a great day for conservative rhetoric in America.

After the Supreme Court upheld a key provision of Obamacare by rewriting the law (again), President Obama urged Americans to be deferential to the wisdom of long-established traditions and customs.

“What we’re not going to do is unravel what has now been woven into the fabric of America,” the president said in the Rose Garden of the White House.

This Burkean admonition was not addressed to the Supreme Court ahead of its forthcoming decision, released today, on whether states could uphold the traditional definition of marriage which, as the court acknowledged, “has existed for millennia and across civilizations.”

Nor was it intended for the president’s friends on the left who are hell-bent on restricting religious liberty, gutting the First Amendment’s protection of free speech, purging every last reference to God from the public square, repealing the Second Amendment, bypassing the electoral college, nationalizing every local issue and Swedenifying America as quickly as possible (except on abortion, where the Swedes are insufficiently progressive).

Marriage, religious liberty, religious rhetoric, free speech, gun rights, constitutionalism and federalism—these are not part of the American way of life. We’ve had them for only two centuries (in some cases four). They haven’t had time to be sufficiently “woven into the fabric of America.”

Obamacare, by contrast, is as American as apple pie. Nothing is more tightly woven into the fabric of America than this monstrous, ill-conceived, poorly implemented, unpopular, unconstitutional, incoherent law, passed by hook and crook five years ago.

As Lincoln so admirably said in its defense: “One-quarter score years ago, our fathers brought forth on this continent, a new law, conceived in Fairness, and dedicated to the proposition that all men are entitled to health care.”

And so, Barack-we-are-five-days-away-from-fundamentally-transforming-the-United-States-of-America-Obama channeled his hitherto hidden inner paleocon to tell critics it was time to move on. The court had spoken.

“Five years in, this is no longer about a law, “ he said. “This is not about the Affordable Care Act as legislation or Obamacare as a political football. This is health care in America.”

The Defense of Marriage Act’s definition of marriage, by contrast, was not “marriage in America” when the president’s administration announced it no longer would defend it in court, even though it had been the settled law of the land for almost 15 years (which is three times longer than Obamacare for those keeping track).

Nor has the president been shy about criticizing and challenging Supreme Court rulings he dislikes. For example, on the fifth anniversary (oh the delicious irony) of the Citizens United ruling he took time out of his busy schedule to issue a statement calling for its overturning: “The Citizens United decision was wrong, and it has caused real harm to our democracy.”

In sum, the president’s staunch defense of the status quo and deference to the wisdom of the courts applies only to policies he and his fellow progressives support. For everything else, progress, change and accusations of judicial activism are the name of the game.

And so, less than 24 hours after his stern warning not to mess with the fabric of America, the president celebrated the Supreme Court’s redefinition of traditional marriage as an example of “justice that arrives like a thunder bolt.”