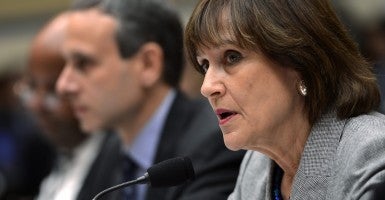 Investigators at the Internal Revenue Service are looking to agency employees as the reason thousands of emails from former IRS official Lois Lerner were lost, and the agency’s watchdog said today their actions were a mistake.

Employees erased the contents of the tapes just a month after IRS officials were told that thousands of Lerner’s emails were missing because of a hard drive crash.

In his testimony, George said he “did not uncover evidence that the erasure was done in furtherance of an effort to destroy evidence or conceal information from Congress and/or law enforcement.”

Additionally, the IRS watchdog noted that it’s likely the employees didn’t know about a 2013 directive instructing them not to destroy such email backup tapes during the investigation.

“Neither the IRS nor the Justice Department, which has supposedly been investigating the IRS targeting of conservative organizations, would tolerate the destruction of over 400 backup tapes and 24,000 emails,” he said. “They would be in court trying to have an individual American or a business charged with destruction of evidence.”

“This is particularly egregious because it happened after the IRS had received a subpoena and a protective order prohibiting the destruction of the emails,” von Spakovsky continued. “I also have a hard time believing that IRS officials did not know this was wrong—everyone in the agency knew about the Lerner scandal and the investigation.”

Lerner was head of the division overseeing tax-exempt organizations during the time the groups were targeted. She retired from the tax agency in 2013.

Last year, the IRS told Congress that Lerner’s hard drive had crashed in 2011, resulting in the loss of thousands of emails sent during the same time period the groups were singled out.

Since then, the IRS has been able to produce 78,000 emails from Lerner that were originally discovered missing.