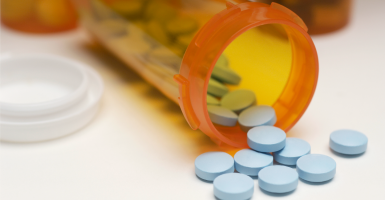 A congressional investigation into a “Candy Land” physician who allegedly “doped up” and “zombified” veterans has uncovered disturbing new details.

The probe has faced stonewalling and hostility from federal agencies, according to the Senate Committee on Homeland Security and Governmental Affairs. (See full report at the bottom of this story.)

In January 2015, reports surfaced that the then-chief of staff, Dr. David Houlihan, at the Veterans Affairs Medical Center in Tomah, Wis., had been nicknamed “Candy Man” by vets and employees for allegedly dispensing drugs like candy.

Marine Corps veteran Jason Simcakoski died of “mixed drug toxicity” at the facility on Aug. 30, 2014, with more than a dozen drugs in his system. Within days, veteran Thomas Baer died of neglect after waiting hours to be seen at the facility’s urgent care center.

Among other findings, an interim report issued today by the Republican majority staff of the committee found that problems at the Tomah VA Medical Center were long known inside the facility and the federal government. Chairman Sen. Ron Johnson, R-Wis., is leading the inquiry.

The report says vets and employees referred to Houlihan as the “Candy Man” as far back as 2004, that the facility was possibly at risk of losing its federal approval to dispense controlled substances due to its questionable prescribing practices, and that the federal Drug Enforcement Administration conducted at least three inquiries into drug diversion there.

Yet federal agencies are refusing to fully cooperate with the congressional probe, according to today’s report. It says the Drug Enforcement Administration has refused to provide full information about its investigations, and the Justice Department has not turned over information about its reviews of public corruption and drug diversion allegations.

“To date, the VA OIG continues to obstruct the Committee’s investigation by withholding vital information about its inspection of the Tomah VAMC, and has indicated that it no longer intends to produce any additional documentation pursuant to the subpoena,” says the report.

However, the committee has received a great deal of information from other sources, including dozens of whistleblowers. One of them, who is not named in the report, says veterans began calling Houlihan the “Candy Man” in 2004.

“When Dr. Houlihan came in, he started to prescribe meds very freely to the veterans” and was “being so free with [prescribing] ‘benzos’ [benzodiazepines],” said the whistleblower.

Houlihan’s practices were well known, the report finds. A letter provided to the committee shows the local union of American Federation of Government Employees raised concerns about the “Candy Man” in 2009. The letter described how many vets were being “prescribed large quantities of narcotics.” It also cited an example of Houlihan writing a prescription for 1,000-plus narcotic tablets for a 30-day supply.

The letter states: “There have been several unexplained deaths at this Medical Center. In 2008, there were three suicides of veterans while sitting in parked vehicles on the Medical Center grounds. These patients were counseled by Psychiatrist/Chief of Staff Dr. David Houlihan.”

In January, the state of Wisconsin announced it had opened an investigation into Houlihan. In March, he was placed on administrative leave after an internal, preliminary review found “unsafe clinical practices” at the Center which resulted in “patient harm.” Houlihan has reportedly told reporters he’s been instructed not to comment during reviews of his management and prescription practices.

Under public pressure in January, the inspector general released the results of its own investigation into the facility, which it had previously kept confidential. It concluded Houlihan was in the top 10 most prolific prescribers of opiates of more than 3,000 in a multi-state region. The inspector general noted “potentially serious concerns” but did not fault Houlihan because the amounts prescribed did not “constitute proof of wrongdoing.”

Houlihan’s lawyer, Frank Doherty, has told reporters that he is confident any additional investigations will conclude there was no wrongdoing on his client’s part.