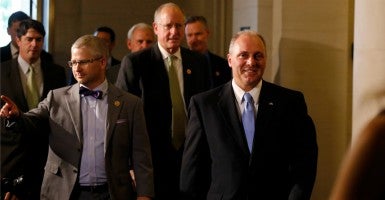 “The issue with Mark’s vote is that we have a rule vote, which is a shirts vs. skins vote. Republicans, if you’re in the majority, vote for it. That means you can control the debate. And if you’re in the minority, you vote against it,” McHenry explained on “First Talk With Hal Row”.

“Well, Mark voted against it. That is basically siding with the Democrats to hand over the House floor.”

Rep. Mark Meadows of North Carolina is one of several Republicans to face retribution for voting against party leadership. (Bill Clark/CQ Roll Call/Newscom)

McHenry, who was appointed to his post of chief deputy whip by Republican Whip Steve Scalise, R-La., last year, went on to explain that conservatives need to fall in line for the sake of party unity.

In addition to his vote against the rule last week, Meadows also drew scorn from GOP leadership when he didn’t cast a vote for John Boehner to be speaker. McHenry cited that as problematic.

“Mark also voted against the speaker. Look, we all can have a discussion about John Boehner, but he was the Republican nominee for speaker. And the opportunity to vote against him was in November when we had the nominating contest within the House Republican Conference,” McHenry explained.

McHenry likened it to a choice he faced during the 2008 general election. He was a vocal critic of Sen. John McCain, R-Ariz., during the presidential primaries but eventually voted for him.

“In 2008, John McCain was not my choice to be the Republican nominee for president but I voted for him in the general election because the choice was Barack Obama vs. John McCain,” McHenry said. “We had a similar situation on the House floor. We can all come to different conclusions, but those are the facts as I see them.”

The controversy involving Meadows began late last week when he was removed from his post as chairman of the Government Operations subcommittee by House Oversight and Government Reform Chairman Jason Chaffetz, R-Utah. His ouster was seen as retribution from House Republican leadership after Meadows voted against a procedural rule that would have advanced Trade Promotion Authority. Thirty-three Republicans joined Meadows in opposing the rule.

Several of those GOP lawmakers—specifically those chairing other subcommittees—have also been approached by the leaders of their respective full committees. However, Meadows is currently the only one who lost his chairmanship.

Republican leadership’s actions in the wake of the procedural vote have been viewed as evidence of the “culture of punishment” Meadows believes exists among the current GOP leaders.

“When it comes to controlling the House floor, I stand in favor of Republicans controlling it and not handing it over to Nancy Pelosi.”

“Are we going to allow these type of bully tactics in Washington, D.C., that has the effect of changing votes against people’s conscience? I would suggest no,” Meadows told talk-radio host Sean Hannity in an interview Wednesday. “I, for one, am glad I stood with the American people and specifically those I represent in North Carolina. If this is the price I have to pay, so be it. It’s the price of freedom.”

Over the last few years, more than a dozen Republicans, including Meadows, have been punished for defying GOP leadership, with several lawmakers being penalized for their vote last week.

Reps. Trent Franks of Arizona, Cynthia Lummis of Wyoming and Steve Pearce of New Mexico were kicked off the GOP whip team for voting against the procedural rule.

Additionally, members of the freshman class are gathering early Thursday morning to discuss the future of their current class president, Rep. Ken Buck, R-Colo. The freshman lawmakers will likely vote to replace Buck—a move that is viewed as another example of Republican leadership seeking retribution from those who voted in opposition to the rule. Meadows predicted other conservatives would face a similar fate. He’s maintained that lawmakers must be able to vote their conscience—a point McHenry disputed Wednesday, even though 10 years ago he made a similar argument against a trade bill Republican leaders supported.

In 2005, the GOP-controlled House narrowly passed the Central America Free Trade Agreement by a vote of 217 to 215. McHenry opposed the measure, citing its negative impact on North Carolina. He said that vote was different from the one Meadows took last week.

“A conscience vote is one about a deeply held moral conviction,” McHenry said. “It’s very difficult to say it’s a conscience vote when you say these three amendments are allowed to go on this bill. It’s a very convoluted assessment to say that is an act of conscience. It’s a question of process.”

“When it comes to controlling the House floor, I stand in favor of Republicans controlling it and not handing it over to Nancy Pelosi.”

Update: While most of the North Carolina delegation has remained silent, at least one other Republican has spoken favorably of Meadows following his punishment. Rep. Mark Walker, R-N.C., tweeted his appreciation for his colleague Wednesday.

Mark Meadows-thank you for your dedication. Proud to call you my friend & NC is blessed to have your representation in DC. @VoteMeadows