The Two Key Mistakes the Supreme Court Made When Deciding Kelo 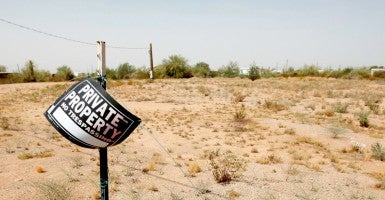 The Fifth Amendment Public Use Clause authorizes a city to exercise its eminent domain power only “for public use.”  Yet, in Kelo the court permitted a city to transfer one homeowner’s property to another private party as long as there would be some future “public benefit.”

The perceived injustice of allowing the government to transfer a citizen’s perfectly well-kept land to a corporation for its own use generated dismay and anger throughout the public and resulted in a host of state constitutional amendments and other takings restrictions.

Ten years later, the case’s reputation is no less notorious. In a recent legal memo, “Revisiting Kelo,” The Heritage Foundation documents the confluence of errors in the Kelo decision and sketches where we can expect to go from here.

In both Berman v. Parker (1954) and Hawaii Housing Authority v. Midkiff (1984), the Court addressed cases involving nonfrivolous claims of injuries to the public: urban blight and oligopolistic land use. Historically, the government has had the right to protect the public by condemning property that injures the public.

In Berman, however, the court mistakenly concluded that “[t]he ‘public use’ requirement is … coterminous with the scope of a sovereign’s police power.” As a consequence of conflating the state’s eminent domain power (which is limited by the Public Use Clause) with its general regulatory power (which is a component of the government’s police power), Kelo misread decades of precedent that had more specifically addressed government use of police power under the 14th Amendment’s Due Process Clause, not the use of eminent domain.

Kelo also erred in treating the concept of “public use” as “public purpose.” The memorandum emphasizes that, because the court did not address a Public Use Clause question until late in the 19th century, it did not have the opportunity to articulate a well-developed theory of the meaning of the Public Use Clause that was grounded in the Framers’ intent. The text of the Public Use Clause limits takings to situations in which land would be used by the general public or by its representative, the government. Nevertheless, the Supreme Court has consistently read the term “public use” far more broadly as meaning mere public benefit.

Although the Supreme Court has continued to give lip-service to the proposition that the government may not take property from “A” simply to give it to “B,” the reality is that the court has never found a taking that fails the public benefit test.

Indeed, in her Kelo dissent Justice Sandra Day O’Connor stated that no one but a “stupid staff[er]” could fail to imagine some public benefit from any government taking. With Kelo, what remained of the meaning behind the Public Use Clause went up in flames—and with it, the protection of citizens’ property rights.

Tomorrow, the 10th anniversary of the Kelo decision, The Heritage Foundation will host an event to revisit this notorious case and discuss how it puts private property rights at risk. Join Paul Larkin (author of “Revisiting Kelo”), Daren Bakst (author of “A Decade After Kelo: Time for Congress to Protect American Property Owners”), and Dana Berliner of the Institute for Justice (the organization that represented Susette Kelo before the Supreme Court), as they make the case that Kelo was wrongly decided and for congressional action to restore the integrity of property rights in the post-Kelo landscape.

RSVP to attend the event in person, or join us remotely via online streaming.