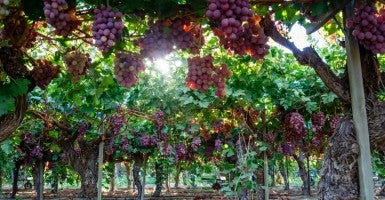 Can the government force raisin farmers to hand over large portions of their crop without paying any compensation?

On Monday, eight members of the Supreme Court resoundingly said, “No!” in Horne v. Department of Agriculture.

Under a 1940s era marketing order intended to maintain profits for domestic raisin producers, farmers are required to sell their raisin crops to raisin handlers, who then remove a portion of the crop from the market for the federal government to destroy or sell overseas at bargain barrel prices. The government sets the compensation price that the producers are to be paid for the surrendered raisins.

The point of this scheme is to artificially limit raisin sales in the United States so as to raise prices and profits for California raisin producers, a result at odds with the free market and with the interests of consumers.

California raisin farmers Marvin and Laura Horne sought to evade this cartel regulation by handling their own raisin crop rather than by selling it to traditional handlers, to whom the Raisin Order clearly applied. Similarly, by buying and handling other producers’ raisins for a per-pound fee, the Hornes believed that they could avoid the Raisin Order’s definition of “handler” with respect to those purchased raisins.

An Agriculture Department regulator disagreed, finding the Hornes liable for numerous violations and fining them over $695,000, including an assessment of nearly $484,000 for the dollar value of the raisins not held in reserve.

The Hornes challenged the government’s scheme as a violation of the Fifth Amendment Takings Clause, which prohibits the government from taking “private property for a public use” “without just compensation.” Writing for a majority of the Supreme Court, Chief Justice John Roberts found that the Takings Clause applies to personal property (i.e., raisins) as well as real property (i.e., the family farm). He concluded, “The Government has a categorical duty to pay just compensation when it takes your car, just as when it takes your home.”

The lower court had rejected the Hornes’ claim, finding that personal property is entitled to less protection than real property and analogizing it to a regulatory taking—e.g., a government condition on the approval of a land use permit.

Today, the Supreme Court reversed, holding that neither the text nor history of the Takings Clause suggests that the Constitution treats government appropriation of personal property and real property differently. This principle can be traced back to Magna Carta, and as the court explained, the Fifth Amendment was drafted, in part, “in response to the arbitrary and oppressive mode of obtaining supplies for the army, and other public uses … during the revolutionary war, without any compensation whatever.” Further, the majority pointed out that its precedents make clear that there is a “longstanding distinction” between regulations on property and the government occupying or taking away property.

The court further held that the government’s pay-to-play requirement that the Hornes and other raisin farmers surrender some of their crop (some years nearly 50 percent of their crop) as a condition of entering the raisin business is a per se regulatory taking. The Hornes conceded that the government would not effect a taking if it simply banned the sale of raisins, but as the majority observed:

A physical taking of raisins and a regulatory limit on production may have the same economic impact on a grower. The Constitution, however, is concerned with means as well as ends. The government has broad powers, but the means it uses to achieve its ends much be consistent with the letter and spirit of the Constitution.

The majority noted that selling raisins in interstate commerce is “not a special governmental benefit that the Government may hold hostage, to be ransomed by the waiver of constitutional protection.”

Chief Justice Roberts retorted, “The dissent suggests that the Hornes should be happy, because they might at least get something from what had been their raisins.” Clearly the Hornes weren’t happy, and the majority agreed that they didn’t have to be.

This decision is a victory for economic freedom and the right of individuals not to participate in government cartel schemes that harm the public interest. Faced with having to pay just compensation to non-participating farmers, the Agriculture Department may consider letting its harmful marketing orders wither on the vine.