Mark Meadows to Fight GOP House Leadership: ‘Sometimes You Have to Make Changes to the Coach’ 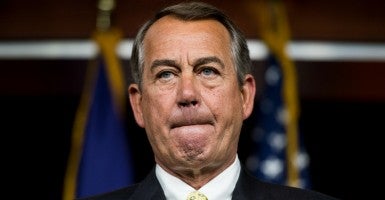 A conservative House lawmaker angry at “a culture of punishment and fear” created by Speaker John Boehner and his leadership team has had enough.

“For the last six months they have doled out small punishments in a variety of forms,” said Rep. Mark Meadows of the conservative House Freedom Caucus.

“I personally have received those. I have not gone public until now—because they went public first. The leadership team wants to create a culture of punishment and fear without a culture of debate and dialogue. But there is no honor in bowing to a bully. There is only honor in fighting a good fight—win or lose. This is not a fight I will back down from.”

Meadows, R-N.C., was greeted in his Capitol Hill office last Thursday by Rep. Jason Chaffetz, the House Oversight and Government Reform chairman, and given a lose-lose choice.

He could resign as chair of the Government Operations subcommittee or be removed from the role.

Meadows, bucking party leaders intent on giving trade powers to President Obama, was one of 34 Republicans to vote against a normally routine procedural vote that allowed a vote on Trade Promotion Authority to occur.

Last week, in a similar show of force against its own party, House Majority Whip Steve Scalise, R-La., removed Cynthia Lummis of Wyoming, Steve Pearce of New Mexico and Trent Franks of Arizona from the GOP vote-counting (whip) team.

In response to this “trend” of retribution, conservative lawmakers planned a phone call for Monday tonight to discuss how to respond.

Meadows, in an interview with The Daily Signal, hinted that the response would be aggressive.

“My punishment has nothing to do with job performance,” said Meadows, adding that his vote against the procedural rule on trade was the first time he had voted against such a motion.

“I was given the option of resigning. But I felt like resigning would be admitting that I did something wrong, when all I did was vote with my conscience. This is designed to intimidate and humiliate me and I wear that as a badge of honor. It is a badge of honor to stand for freedom.”

There has been a suggestion that I should keep quiet and mind my manners for several months and then I will be given an opportunity to receive some of the benefits leadership allows. But if we allow ourselves to be bullied in the House of Representatives, how will we stand for Americans being stripped of their freedoms?

This past weekend, in an interview with Politico, Chaffetz, using a sports reference, compared his action against Meadows to how a coach “needs to make a change on the field.”

Today, Meadows turned that reference around—directing his ire at Boehner.