How Liberals Manipulate Data About the Minimum Wage 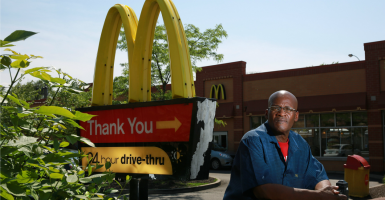 Douglas Hunter, 53, outside the McDonald's where he works. Hunter is an advocate for the Fight for $15, a campaign to increase minimum wage for fast-food workers. (Photo: John J. Kim/TNS/Newscom)

Does the U.S.-Canadian speed gap bother you? Americans can drive no faster than 65 on Massachusetts highways. Meanwhile Canadian motorists zip along at speeds of up to 100. Congress should close this inequitable speed gap!

This argument sounds ridiculous, because it is. Canadians measure speed in kilometers per hour, not miles per hour. Moreover, many states have higher speed limits than Massachusetts. Any comparison that doesn’t account for such differences means little.

Consider the chart below, produced by the left-wing Economic Policy Institute (EPI). The EPI argues that the minimum wage has lost purchasing power since 1968. Their figure juxtaposes the inflation-adjusted federal minimum wage with projected changes had it increased at the same rate as (1) average hourly earnings of production and non-supervisory (i.e. hourly) workers, or (2) economy-wide productivity. EPI argues this demonstrates the need for Congress to raise the minimum wage.

This chart is highly misleading, but for reasons invisible to most readers. EPI used different metrics to measure and adjust their pay and benefit figures for inflation. This creates completely spurious differences—just like comparing speeds calculated in kilometers and miles per hour. The EPI used the Consumer Price Index Research Series (CPI) to adjust the minimum wage and average hourly earnings for inflation. It used the Implicit Price Deflator (IPD) to adjust productivity for inflation. For methodological reasons (that I have written about elsewhere), the CPI consistently reports more inflation than the IPD. The CPI and IPD measure inflation differently. The Congressional Budget Office itself uses a third measure, the Personal Consumption Expenditures (PCE) index, for its minimum-wage research. The PCE produces figures roughly in between the other two. As it happened, EPI chose the metric that showed the minimum wage dropping in real value the most.

Nowhere in its figure does the EPI explain they did this. Their “note” only mentions the CPI. But their analytical choices make a large difference for their overall story. Using the same measure of inflation for both productivity and pay would show the real value of the minimum wage has barely changed over the past half-century.

EPI compounds this problem by juxtaposing figures for completely different groups of workers. Less than 3 percent of workers earn the federal minimum wage. The “average hourly earnings” measure, by contrast, covers about three-fifths of the workforce. The productivity figures cover the entire economy. That productivity and wages should grow at different rates in different parts of the labor force should surprise no one. Drivers can go faster in Texas than in Massachusetts, too.

Worse, the EPI’s “average wages” figure covers a shifting group of workers. In the 1980s, the Bureau of Labor Statistics expanded that survey to include workers at smaller (and lower-paying) companies. So it now includes more low-wage workers than in the 1970s. This mechanically depressed average wage growth.

Fortunately, the Bureau of Labor Statistics has another estimate of employee hourly compensation for the private sector. It comes from the same report containing the productivity estimates. This data tracks the same group of private-sector employees (virtually all) over time. Better yet, it includes both wages and non-cash benefits, not just cash benefits alone. Curiously, EPI chose not to use it.

These choices make a large difference in their overall story. EPI’s figures showed pay stagnating for the average worker (not just minimum-wage employees) while productivity doubled. That seems unfair. The real story is quite different. The figure below shows the growth in average hourly compensation and productivity for the same group of workers (the entire non-farm business sector) and using the same measure of inflation (the IPD).

These comparably adjusted statistics show that productivity and pay have moved nearly in lockstep over the past generation. Analyzing the data this way makes it hard to claim workers do not enjoy the fair fruits of their labor. EPI chose not to analyze the data this way. But serious analysis requires it. Using different measures of inflation and comparing the productivity and pay of different groups of workers shows little. It makes as much sense as objecting to a 65-to-100 Massachusetts-Canadian speed gap.

They’re Right About One Thing

Over this period, productivity has grown much more slowly in fast-food restaurants than in the economy as a whole. It’s up just 13 percent. Hourly compensation has closely tracked this modest productivity growth—it’s up 9 percent (both figures are inflation-adjusted using the IPD for limited-service eating places). In fact, two-thirds of minimum-wage workers earn a raise within a year. New entry-level workers then replace them, until they move on. Jobs such as fast-food cashiers have remained low-productivity positions even as the workers filling them move on and up their career ladders.

EPI compared statistical apples and potatoes. Their bad data has led policymakers to bad conclusions. On the basis of such analysis, members of Congress have introduced legislation that would raise the federal minimum wage to $12 an hour by 2020. The bill’s sponsors argue the minimum wage has lost purchasing power; they simply intend to return it to its previous level.

In fact, they have proposed a historically unprecedented increase in the minimum wage that would force millions of less skilled workers out of their jobs. They could just as justifiably argue that Canada proves the safety of driving 100 on the highway.