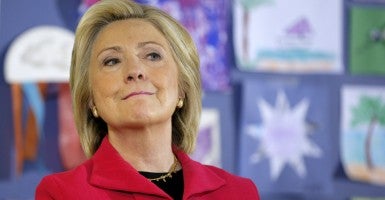 Former Secretary of State Hillary Clinton recently called for the doubling of funding for Early Head Start—a community-based program that serves low-income families with pregnant women, infants and toddlers up to age 3.

Unfortunately, Early Head Start has not proven successful in achieving its goals.

The evidence tells a different story. From time to time, an early-childhood education program will appear to work, but the federal government has a poor track record of replicating successful programs on a national scale. Just consider what we really know about Early Head Start.

Created during the 1990s, Early Head Start was inspired by the findings of the Carolina Abecedarian Project. The Abecedarian Project, in a study of 111 children, was found to have a long-term effect on increased educational attainment with the treatment and control groups averaging 13.46 and 12.31 years of education, respectively. However, the Abecedarian Project had no measurable impact on income or criminal convictions.

A pair of federally funded, larger-scale and better-quality studies made public in 2002 and 2010 examined the lives of children who attended 17 Early Head Start sites selected by the Department of Health and Human Services. Researchers evaluated a group of 3,001 study and control families when participating children reached age 3 and again in fifth grade.

At age 3, Early Head Start appeared to have a few modest beneficial impacts on child cognitive and language development and child-social-emotional growth. However, these initial modest benefits were not uniform across children of different race and ethnic backgrounds. Almost all of the positive findings for all Early Head Start participants appear to be driven by the positive findings for black children. The program had little to no effect on white and Hispanic participants, who are the majority of program participants. For Hispanic children, the program failed to have a short-term impact on all measures of child cognitive and language development, while the program had a beneficial effect on only one of nine measures of child-social-emotional development. For white children, the program failed to produce any beneficial impacts on any of the outcome measures.

More importantly, however, the few modest positive short-term effects of Early Head Start disappeared by the fifth grade. For all children, Early Head Start had no effect on social-emotional outcomes and academic outcomes, including reading, vocabulary and math skills.

What happened when the long-term results were analyzed by race and ethnicity? There were only two beneficial impacts for black children on 11 of the social-emotional outcomes. For Hispanic and white children, there was no beneficial effects for any of the outcomes. For child academic outcomes, the long-term findings by race and ethnicity were consistent. Early Head Start failed to affect any academic outcomes for any of the subgroups.

And here is the problem. Given the scientific uncertainty, advocates cannot answer the following question: Will increased federal spending on early childhood education programs improve children’s futures? The evidence says probably not.

By creating the false illusion that we are helping children in need, programs like Head Start and Early Head Start do a tremendous disservice by wasting both the resources and the political will for effective action. There may, in fact, be ways we can help children in need. But we won’t find them if we believe, despite the evidence, that the right programs are already in place.