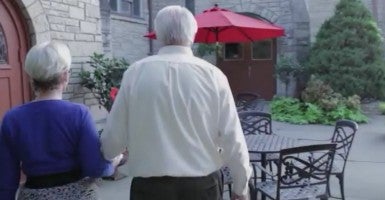 Richard and Betty Dick Odgaard of Grimes, Iowa, are forced to sell their family business for fear of facing further charges of discrimination. (Photo: The Becket Fund for Religious Liberty)

Charged with discriminating against a gay couple, the owners of another Christian family-run business are being forced to shut their doors.

“We can’t pretend it’s going to get better,” Betty Odgaard told The Daily Signal in an exclusive interview. “There wasn’t enough business.”

Betty and her husband, Richard, are the owners of Görtz Haus Gallery in Grimes, Iowa. In 2002, they purchased the 77-year-old stone church and transformed it into a bistro, flower shop, art gallery and wedding venue.

On August 3, 2013, a gay couple from Des Moines asked to rent Görtz Haus for their wedding.

Because of their Mennonite faith, the Odgaards told the couple they could not host their wedding.

Within 24 hours, the couple filed a discrimination complaint through the Iowa Civil Rights Commission.

“We knew that the business was going to be in trouble almost immediately,” Richard, 69, said. “We had to get rid of the wedding business to avoid another complaint and possibly a higher penalty.”

The Odgaards never admitted to any discrimination, but agreed to a $5,000 settlement.

They also returned two non-refundable deposits for couples who, after hearing media reports, didn’t want to use their space for their weddings anymore.

“It was just the right thing to do,” Richard said. If they continued to offer wedding-related services, the Odgaards knew they could be subject to another discrimination complaint.

Around town, Görtz Haus became known as the business that refuses to serve gays.

If a group of ladies went to lunch and one disagreed with their opinion not to host same-sex weddings, the entire group boycotted the bistro, the Odgaards explained.

Betty said the situation drove her into a “really dark depression”—so bad, that she had to seek the help of professionals.

“I’m a melancholy artist and no stranger to depression, but this took me down to the darkest I’ve ever been before,” she said.

The case was the first of its kind in Iowa, but it didn’t receive the same sort of media attention as the bakers in Oregon, the photographers in New Mexico or the farmers in New York.

The couple says that’s because pending litigation prevented them from being able to speak out, further isolating them from their community.

“We didn’t get the Chick-fil-A response,” Richard half-heartedly joked. The Odgaards faced an 18-month legal battle over their refusal to host a same-sex wedding. (Photo: Dick and Betty Odgaard)

The Odgaards don’t blame the gay community for shutting them down, but rather, the state of Iowa.

“With the discrimination laws and the legality of same-sex marriage in this state, now you have to prove that you didn’t discriminate,” added Richard.

The Odgaards also feel they never got their day in court, and had the case turned out differently, they might not have been driven out of business.

“This was all administrative judgement,” Richard said. “The [gay couple] had a platform to file their case and we didn’t get our day in court with a jury of our peers.”

Like the other lawsuits involving charges of discrimination, complaints are filed—and judged—in the Iowa Civil Rights Commission.

Originally, the gay couple asked for $10,000, but lawyers for the Odgaards at The Becket Fund for Religious Liberty were able to negotiate a settlement for half that amount.

“Now the precedent has been set,” Richard said. “The administrative process has demonstrated what it will do if this happens, so it’s a matter of setting somebody up and collecting money. It’s that simple. It’s all they have to do.” Yesterday, the Odgaards spent the day calling vendors and sharing the news that by the end of August, they’ll be closed completely.

“We have to look on the positive side, but just telling our family what we are doing, telling vendors the decision that we’ve made, it’s been very tough,” Betty said.

The couple has decided to take their story and use it to advocate for Christian teachings by creating God’s Original Design Ministry.

With the ministry, they hope to promote the importance of religious liberty, “regardless of what your religion is,” Richard said.

They received their nonprofit status earlier than expected, which they took as a sign from God.

As for the future of Görtz Haus, the Odgaards hope that it will return to its original function: a church.

“That would be the most wonderful option,” Betty said.