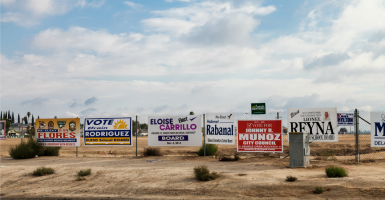 In a unanimous decision, the Supreme Court struck down a town’s sign ordinance as an unconstitutional, content-based regulation of speech. This ruling for free speech means the government can’t pick and choose what speech deserves more protection based on the content of the speech.

Like most other towns in America, Gilbert, Ariz., regulates when, where and how signs may be displayed around town. Temporary non-commercial signs are classified by their content, and each category has its own set of regulations.

The Good News Community Church, which holds services at different facilities such as local schools because it doesn’t have a permanent church, uses signs to invite people to services. Because the signs include directional information (i.e., an arrow pointing to the location of the service), they may not be bigger than 6 square feet and can go up only 12 hours before their Sunday services start, meaning the signs are posted late on Saturday night when they are hard to see in the dark.

The church challenged the town’s sign code in 2007 as an impermissible content-based restriction on speech in violation of the First Amendment. The district court in Arizona upheld the sign code, and the 9th Circuit Court of Appeals agreed, finding that there was no evidence that the town adopted its sign code for a discriminatory purpose.

Today, the Supreme Court ruled in favor of the Good News Community Church, concluding that these sign restrictions are content-based regulation because they define the categories of temporary, political and ideological signs on the basis of their messages and subject each category to different restrictions. As Justice Clarence Thomas points out,

The court found that these restrictions are subject to, and do not survive, strict scrutiny because the town did not demonstrate that the differentiation furthers a compelling governmental interest and is narrowly drawn. Assuming the town has a compelling interest in preserving its aesthetic appeal and traffic safety, the code’s distinctions are highly underinclusive.

Thus, the town cannot claim that placing strict limits on temporary directional signs is necessary to beautify the town when other types of signs create the same problem, and it did not show that temporary directions signs pose a greater threat to public safety than ideological or political signs.

The Supreme Court also pointed that the 9th Circuit made a basic error in its analysis that the town’s regulation was not based on a disagreement with the message conveyed. As Thomas explains, “an innocuous justification cannot transform a facially content-based law into one that is content-neutral.”  Thomas continued:

Innocent motives do not eliminate the danger of censorship presented by a facially content-based statute, as future government officials may one day wield such statutes to suppress disfavored speech … [O]ne could easily imagine a Sign Code compliance manager who disliked the Church’s sustentative teachings deploying the Sign Code to make it more difficult for the Church to inform the public of the location of its services.

This decision will not prevent governments from enacting effective sign laws since there are ample content-neutral options available to resolve problems with safety and aesthetics, including regulating size, building materials, lighting, moving parts and portability of signs.

In fact, in a concurring opinion written by Justice Samuel Alito and joined by Justices Anthony Kennedy and Sonia Sotomayor, Alito provides a long list of possible rules that municipalities could enact regulating signs that would not be content based and thus prohibited. They range from rules based on size and location, to rules imposing time limits or distinguishing between lighted and unlighted signs.

As Alito says, local governments retain the power to “enact and enforce reasonable sign regulations.” It is just that the rules that stopped Pastor Clyde Reed from encouraging the public to attend his church were neither reasonable nor justified by concerns for public safety or the beautification of the town of Gilbert.