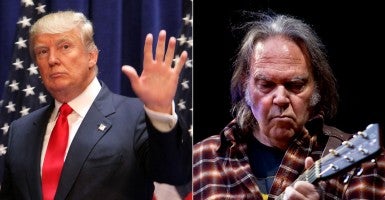 Neil Young, right, is no fan of Donald Trump and wants him to stop using the 1989 hit song “Rockin’ in the Free World.” (Photos: Nancy Kaszerman/ZUMA Press/Newscom and Per Ole Hagen/CC BY-SA 1.0)

When Donald Trump announced he was running for president Tuesday, the event featured Neil Young’s 1989 hit song “Rockin’ in the Free World.” It was part of Trump’s rollout at his Manhattan office building—an event cable networks covered live and generated huge interest on Facebook.

One person, however, was not amused. Young is no fan of Trump and wants him to stop using the song.

Trump isn’t the first candidate to encounter such a request. The website FiveThirtyEight.com chronicles 30 times politicians were told to stop using songs by their artists. Nearly all of them happen to be Republicans.

For some musicians, though, it’s not even that Republicans use their work. The fact that they have the audacity to enjoy their art is enough to draw ire.

Tom Morello, the vocal guitarist of “Rage Against the Machine,” upon learning that former vice presidential candidate Paul Ryan liked the group, told Rolling Stone that “Paul Ryan is the embodiment of the machine our music rages against.”

When Sen. Marco Rubio revealed that he was a fan of rap acts like Jay-Z and Tupac, hardly a word was said. Likewise, nothing much was said of former Rep. Trey Radel’s tweet-by-tweet review of Jay-Z’s “Magna Carta Holy Grail” album.

When Obama revealed in the 2008 campaign that he had Jay-Z on his iPod, however, it was everywhere. Billboard even wrote an article on the contents of Obama’s iPod, suggesting that Obama’s iPod could pass for a voter outreach tool. Since then, he’s captured the youth vote twice, and Jay-Z has been to the White House four times.

The late Andrew Breitbart was fond of saying that “politics is downstream from culture,” meaning pop culture influences our politics.

To say conservatives have an uphill battle in culture is fair, but the game is rigged against them.

All is not lost, however. Nirvana bassist Krist Novoselic disclosed to Reason TV last year that he left the Democratic Party. He’s donated money to former GOP Rep. Ron Paul and supports the Citizens United decision.

This is not to say that people should stop listening to these bands or musicians based on their political preferences. It’s a shame that musicians apparently don’t think the same is true.

As far as Neil Young is concerned, he can tell Trump to stop using his music, but he doesn’t own it, so there isn’t much he can do about it.