Why Conservatives Blame Republican Leadership for Failure on Trade 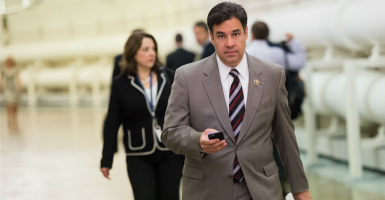 Conservative lawmakers today railed against House Speaker John Boehner and his leadership team for working closely with Democrats on a failed strategy to usher Trade Promotion Authority through Congress.

“What’s most interesting to me is this is the second or third time they’ve [House leadership] negotiated with Democrats and the Democrats go back on their word and they still don’t come to the conservatives to talk,” said Raul Labrador, R-Idaho, speaking at a monthly House conservative lunch before reporters on Capitol Hill.

“Either they [House leadership] are not listening or they are completely unaware about what’s happening in their surroundings and they are only talking to special interest groups that go to fundraisers with them,” Labrador continued.

Labrador is referring to the House’s failure last week to pass Trade Promotion Authority after leadership thought it had developed a careful plan meant to appease both skeptical Democrats and conservatives.

“They are not willing to work with some of us,” says @Raul_Labrador of House Republican leadership.

But later today, hours after House conservatives second-guessed Boehner’s strategy on Trade Promotion Authority, the chamber’s Republican leadership reportedly was set to unveil a new plan meant to save the bill, according to Politico.

The plan would be for the House to vote on an already-approved Senate bill to authorize Trade Promotion Authority.

This standalone legislation would not include a related measure providing aid to workers displaced by trade.

Conservatives generally oppose that program—Trade Adjustment Assistance, or TAA—because they view it as a form of “social welfare,” as Rep. Jim Jordan calls it.

Under House leadership’s original plan that failed last week, both the Trade Promotion Authority and TAA would have had to be approved before the legislation went to the president’s desk.

But skeptical Democrats—who normally support the job training program—rebuffed TAA, arguing that it was funded through cuts to Medicare and would accelerate job losses.

In the new plan, the House could vote on TAA after fast-track authority clears Congress—and now, they could do so any time before July 30 (the House passed a rule today allowing for an extended timeline). If Republican leadership does follow through on the new plan, House conservatives say they are still considering whether to vote for the standalone Trade Promotion Authority bill.

Trade Promotion Authority would allow the president and his successors to negotiate international trade deals without the threat of Congress amending or filibustering those deals.

Instead, Congress gets an up-or-down vote on the trade deals.

While conservatives support not tying fast-track authority with TAA, they still wish party leaders will appease other concerns they have, such as not allowing a vote on the Ex-Im Bank attached to the trade bill.

Conservatives also want stronger “checkpoints” under the fast-track oversight process that would allow them to more easily vote down Obama’s potential trade deal with Pacific Rim nations—known as the Trans-Pacific Partnership—if they don’t like the agreement.

“We hope to have the chance to work with leadership to do a trade package that makes sense, that keeps the safeguards in place, that doesn’t have this social welfare program of TAA, and where Ex-Im Bank goes away,” said Jordan, R-Ohio, who leads the conservative House Freedom Caucus.

Even with more conservative support, House Republicans would need Democrats to pass the standalone legislation, and it’s unclear how many would vote for a fast-track bill without assistance to workers who lose their jobs to trade.

But conservatives say better outreach to them would at least give Trade Promotion Authority a chance.

“All they needed to do was just put TPA on the floor or produce a TPA with amendments that people were asking for,” Labrador said.

“And then you have a conference committee [to discuss disagreements with the Senate] and then out of conference, comes something that probably gets an overwhelming majority in both houses,” he said.

“All that we’re asking for is an open process, and what’s happening here—and happening time and time again—is they want a top down leadership where they tell us exactly the way every bill needs to be,” Labrador added. “When they try to dictate what the final outcome needs to be, that’s not leadership, that’s tyranny.”