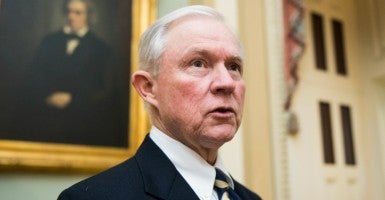 More than 100 convicted criminals who remained in the U.S. despite receiving deportation orders between 2010 and 2014 now face murder charges, according to the agency charged with carrying out such deportations of illegal immigrants.

U.S. Immigration Customs and Enforcement reports that 121 convicted criminals who were never removed from the country face murder charges today.

In their letter, Grassley and Sessions cite Immigration and Customs Enforcement statistics that show 1,000 of the 36,007 criminally-convicted illegal immigrants released from custody in fiscal year 2013 have been reconvicted of additional crimes.

The senators wrote that the murders committed by the 121 convicted criminals “could have been avoided” had they not been released.

As a result, Grassley and Sessions are requesting an explanation from the Obama administration officials concerning the government’s decision to release the convicted criminals before deportation.

The senators also ask for information concerning the future of U.S. initiatives to deport convicted criminals and whether immigration officials are “fully leveraging existing tools and resources to prevent these dangerous outcomes.”

However, Immigration and Customs Enforcement Director Sarah Saldana wrote in a recent letter that convicted criminals may be released, even if the convicted individuals face deportation charges.

In fact, the agency states some individuals who face deportation charges are not required to be detained by law.

This primarily manifests itself though the Supreme Court’s ruling in Zadvydas v. Davis, which requires Immigration and Customs Enforcement to release those who are being detained if the deportation does not occur within 180 days.

Of the 121 convicted criminals, 24 were released because Immigration and Customs Enforcement could not deport the criminals within 180 days, as lawfully required.

Additionally, Grassley and Sessions’ letter claims that the majority of convicted criminals released due to the Zadvydas v. Davis ruling are from one of 12 countries.

Nearly one-third of these criminals are originally from Cuba. Grassley and Sessions requested a statement from Kerry to delineate actions planned to “incentivize cooperation” with Immigrations and Customs Enforcement’s removal efforts.

Both senators also requested a response from Johnson asking if initiatives including the visa waiver program had been implemented in order to “promote compliance with ICE removal efforts among recalcitrant countries.”