This Day in Pictures: Remembering Reagan and His Famous Line, ‘Tear Down This Wall!’ 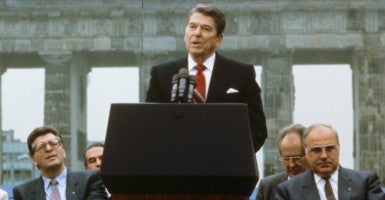 On June 12, 1987, President Ronald Reagan declared, 'Mr. Gorbachev, open this gate. Mr. Gorbachev, tear down this wall.' He's next to German Chancellor Helmut Kohl (right) and Speaker of the German Parliament Philipp Jenninger (left) at the Berlin Wall in front of the Brandenburg Gate in West Berlin, Germany. (Photo: STR/EPA/Newscom)

One of the most recognizable quotes of Ronald Reagan’s presidency was deemed too controversial and was almost never spoken.

Peter Robinson, a young speechwriter for the Reagan White House, was given the task of drafting the president’s speech to commemorate the 750th anniversary of Berlin on June 12, 1987. After visiting the people of Berlin to understand their exasperated resentment, Robinson drafted numerous copies and countless wordings of the now famous phrase.

“Mr. Gorbachev, tear down this wall” was almost revised to “This ugly wall will disappear” after a diplomat in Berlin took out the controversial line, fearing it would be too harsh on Gorbachev.

Yet Reagan made his stance well known.

“The boys at State are going to kill me,” Reagan said, “but it’s the right thing to do.”

Twenty-eight years later, we take a look back at the Great Communicator and the cause he helped to advance in Berlin. The view of the crowd that gathered to hear Reagan speak. (Photo: Ronald Reagan Library) Border policemen stand next in front of the Berlin Wall and Brandenburg Gate in Berlin days after Reagan’s famous speech. (Photo: Wolfgang Kumm/dpa/picture-alliance/Newscom)