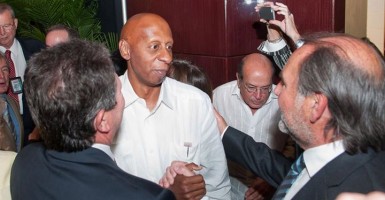 Americans and other friends of freedom need to keep pressure on the Communist regime in Cuba, if true democratic reforms ever are to take root there, one of the leading human rights activists in the island nation says.

“The dictatorship has become stronger over these past two years,” human rights activist @cocofarinas says.

Psychologist and journalist Guillermo Fariñas Hernández, in Washington this week to receive an award from a private, anti-communist foundation, gently rebuked President Obama for failing to follow through on a promise.

“When we heard we weren’t taken into account, we lost a little hope,” Fariñas, whose nickname is Coco and who has gone on 23 hunger strikes and endured 11 years in prison, told a crowd gathered to honor him Thursday. “The dictatorship has become stronger over these past two years.”

In 2013, Fariñas has said, Obama pledged to consult with him and others resisting the Castro government before moving, as the president did almost six months ago, to lift the U.S. economic embargo on Cuba.

“The struggle against the Castro dictatorship has been made harder by Obama’s misguided policies,” @SenTomCotton says.

One of the Senate’s new Republican members, Tom Cotton of Arkansas, was less diplomatic during the lunchtime celebration on Capitol Hill hosted by the Victims of Communism Memorial Foundation.

“The struggle against the Castro dictatorship has been made harder by President Obama’s misguided policies,” Cotton said in well-received remarks before presentation of the foundation’s Truman-Reagan Medal of Freedom to Fariñas.

Mankind’s “basest instincts,” he said, must not be allowed to prevail.

Speaking at the Victims of Communism Commemoration Triumph of Liberty Luncheon this afternoon. pic.twitter.com/qGSFKhQs1i

>>>Related:  US-Funded News Station Wants to Bring Free Press to Cuba. But Raúl Castro Wants to Shut It Down.

Fariñas, a translator rendering his Spanish into English, insisted he would continue to be inspired by older Cubans who opposed the Castro regime upon threat of imprisonment or death in the 1960s and 1970s.

Specifying the day Obama announced a new course on Cuba, Fariñas said: “That is why, after Dec. 17, we decided not to give up hope but to fight even stronger.”

In addition to Fariñas, 53, the Victims of Communism Memorial Foundation this year presents its Truman-Reagan Medal of Freedom to veteran Russian dissident Alexander Podrabinek, 61.

Podrabinek, a journalist and human rights activist, also was scheduled to be honored Friday alongside Fariñas during a public event at the foundation’s Victims of Communism Memorial, a statue and small park dedicated in 2007 in Northwest Washington at the corner of Massachusetts and New Jersey avenues.

“We need men like Guillermo Fariñas and Alexander Podrabinek,” Cotton said, and the U.S. should “stand on principle and link arms” with them.

Today #TRMF recipient, Alexander Podrabenik spoke to us about why fighting for democracy is so important #VOC pic.twitter.com/mHkeTFhMJr

“Obama has been inconsiderate with the civil society that confronts the tyrannical government [of Cuba],” Fariñas told reporters in December after the president announced his policy shift.

The human rights activist recalled that on Nov.  8,  2013, in a meeting at the Miami home of Cuban American National Federation leader Jorge Mas Santos, Obama “promised” him and fellow dissident Berta Soler that “all action that he would undertake with respect to Cuba was going to be consulted with … the non-violent opposition.”

He added: “Obviously, this did not happen … Cuban democrats were not taken into account.”

Here is an account of the Obama-Fariñas meeting from MartiNews.com:

The award presented Thursday to Fariñas is named after Harry Truman and Ronald Reagan—two presidents, one a Democrat and the other Republican, whose vigorous opposition to communism defined their presidencies.

The Victims of Communism organization is dedicated to remembering that communist governments have claimed the lives of more than 100 million people, and continue to pose threats to freedom with what Cotton called “sweet but empty lies” from Cuba to Bolivia to China.

Diaz-Balart called Fariñas, general director of the United Anti-Totalitarian Front, one of his heroes. He noted that dissidents challenge a regime that has arrested 2,000 protesters in the five months since Obama announced his shift in U.S. policy—more than 100 over the past two weekends.

Chiding Obama’s move to loosen sanctions on Cuba without gaining clear democratic reforms, Diaz-Balart quoted Reagan’s famous insistence in 1964—16 years before he was elected president—that a “policy of accommodation is appeasement.”

“President Obama’s policy of appeasement is a policy of surrender in exchange for nothing, in order to make a deal with the slave masters,” Diaz-Balart said.

>>> Commentary: Why We Should Be Skeptical About Raul Castro’s Talk of Conversion

In Congress, he vowed, “we stand with the Cuban people … not the brutal repressers.”

Sen. Ted Cruz, R-Texas, another lawmaker of Cuban descent, was unable to attend in person but spoke in a YouTube video, praising Fariñas and others around the world who he said “bear witness to the truth” about lack of liberty in Cuba.

Cruz warned that the Castro brothers remain “implacably” opposed to freedom and seek to finance the “big jail” and “apparatus of repression” that is Cuba with U.S. trade and tourism.

“Guillermo Fariñas and his brave colleagues refuse to be silenced,” Cruz said, until their nation sees “real reform.” Fariñas also happens to be black in a country with deep-seated prejudice against blacks that continues to exclude them from meaningful participation in government and society.

He was among those roughed up while protesting the April meeting in Panama where Obama shook hands with Cuban President Raúl Castro, brother of longtime dictator Fidel Castro.

“We tell the truth, the whole truth and nothing but the truth about communism.”–Lee Edwards on the Victims of Communism Memorial Foundation.

Lee Edwards, a historian and scholar at The Heritage Foundation, was a key founder of the Victims of Communism organization going back to discussions held after the Berlin Wall fell in 1989.

Edwards said the group’s statue and planned museum are “ports of call” for survivors of communist regimes, and its website is “under constant attack” by hackers.

“Why? Because we tell the truth, the whole truth and nothing but the truth about communism,” Edwards said.

Fariñas said he dedicated the award in part to “those living and suffering who want to see a free Cuba and keep on fighting for it,” including Americans who he said share the values of Truman and Reagan.

“This medal is emblematic, but I won’t earn it until Cuba becomes free and democratic,” he said.