This Is the Moment for Civil Asset Forfeiture Reform 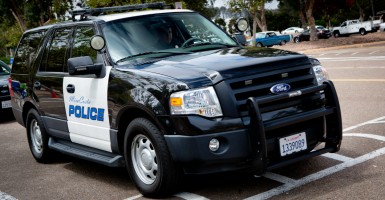 When Joseph Rivers set out for Los Angeles with $16,000 in his pocket to kick-start his career in the music industry, the last thing he expected was to lose his family’s hard-earned money—at the hands of a federal law enforcement officer.

Rivers was never arrested or charged with a crime, but thanks to federal civil asset forfeiture laws, Drug Enforcement Administration (DEA) agents could still seize his money and leave him stranded in Albuquerque, more than 1,500 miles from home.

Now, Rivers is fighting to get his money back. Last week, he got the chance to visit Capitol Hill to tell his story. Alongside him at the legislative briefing was a bipartisan panel of experts—including a former head of the Justice Department’s Asset Forfeiture Office—uniformly calling for reforms to federal civil forfeiture laws.

Civil asset forfeiture is the legal practice that allows law enforcement officials to seize private property and money that is suspected of aiding, or resulting from, criminal activity. Federal forfeiture laws were ramped up in the 1980s to aid law enforcement in cutting the illegal profits of organized crime and drug kingpins.

To incentivize federal law enforcement officers to seize “dirty” assets using forfeiture laws, law enforcement agencies were permitted to retain the proceeds of these seizures to subsidize their budgets. State and local agencies were given a piece of the pie as well, through a program known as “equitable sharing.” That program promised seizing agencies up to 80 percent of the proceeds of forfeiture cases they transferred to the federal government.

This profit incentive worked well—perhaps too well—resulting in an exponential growth in the use of civil forfeiture. In 1985, the first year that federal agencies were allowed to keep forfeiture proceeds, a mere $27 million was deposited into the Assets Forfeiture Fund. Today, annual deposits are measured in the billions. And all of it is used exclusively by law enforcement agencies, with little outside oversight or accountability.

Darpana Sheth, an attorney with the Institute for Justice and a panelist at last week’s briefing, noted that such vast sums of money can distort law enforcement priorities. Sheth pointed to Tennessee, where a Nashville news investigation revealed that drug task force officers were 10 times more likely to conduct traffic stops on the westbound route of I-40 than the eastbound route. Why? While illegal drugs were transported eastward, the illegal proceeds would return to Mexico along the westbound lanes, and it is simply easier and far more lucrative to target cash rather than criminals.

This practice, not uncommon elsewhere, is a clear example of police emphasizing profit over public safety.

Brad Cates, another panelist at the briefing and one of the first directors of the Asset Forfeiture Office at Justice Department, spoke out against the very forfeiture program he helped build. Cates used Joseph Rivers’ unfortunate encounter with the DEA to demonstrate just how far afield federal forfeiture has strayed from its original purpose. The DEA agents who questioned Rivers likely determined the seizure was justifiable merely because he was traveling to a “known drug hotspot” (Los Angeles) and because he could have transported the money in a “more conventional manner.”

Cates pointed out that the original goal of the forfeiture program was to target the assets of the drug kingpins which otherwise might be unreachable to law enforcement. Today, forfeiture is authorized under more than 200 federal crimes, meaning that cash and property can be seized from virtually anybody for a multitude of offenses. And once it is, the owners face an inversion of justice: The property itself is presumed guilty, and they must, in effect, prove their own innocence to get it back.

Joseph Rivers is now one of these innocent owners, and he faces an uphill legal battle as he struggles to win back his money. Legal challenges in forfeiture cases are exceedingly difficult and expensive, and legal fees can cost more than $20,000—and because these are classified as civil cases, challengers who are indigent do not benefit from the right to appointed counsel, a right afforded to indigent defendants in criminal cases. While Joseph has stepped forward to fight the seizure, the reality is that most federal civil forfeitures go uncontested.

The good news is that stories like Joseph’s are catching the attention of federal legislators on both sides of the aisle. This briefing comes at the heels of hearings in both the Senate and the House of Representatives. Sen. Rand Paul, R-Ky., and Rep. Tim Walberg, R-Mich., have introduced a comprehensive civil forfeiture reform measure, the Fifth Amendment Integrity Restoration Act (FAIR Act). Sen. Charles Grassley, R-Iowa, chairman of the Senate Judiciary Committee, has made forfeiture reform one of his top priorities. His own reform proposal is expected soon.

While the federal level is the most significant front in the battle for civil asset forfeiture reform, advocacy cannot end there. Even if federal laws were changed tomorrow, abusive forfeitures could still take place under state civil forfeiture laws. Fortunately, state lawmakers have taken this seriously. Montana, Minnesota, New Mexico and Washington, D.C., have enacted sweeping reforms this year. Pending legislation in California, Michigan and Pennsylvania also looks promising.

Sarah Stillman, the moderator of last week’s bipartisan panel, joked that when her original piece on civil asset forfeiture appeared in The New Yorker, no one would entertain the seemingly dull topic in conversation. Now, public support is rallying behind the reform movement, aided by popular exposés such as John Oliver’s on “Last Week Tonight.”

Although some continue to defend the practice in the face of a long list of abuses, last week’s briefing confirmed this positive development: This is the moment for civil asset forfeiture reform.