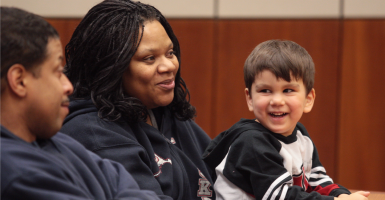 In this 2009 photo, then-two-year old Mahkel smiles while sitting with his adoptive parents Enrique and Pamela Santos during the adoption court proceedings. (Photo: Eric Engman/ZUMApress/Newscom)

Michigan Gov. Rick Snyder has signed into law three bills protecting the freedom of private adoption agencies to operate in accordance with their beliefs, including that children deserve a married mother and father. This is good public policy. The Michigan law comes on the same day the North Carolina legislature protected the religious liberty of clerks and magistrates in that state over the governor’s veto.

Protecting the rights of conscience and religious liberty takes nothing away from anyone. After all, allowing private adoption providers to operate according to their own values—including declining to place children in unmarried or same-sex households—does not prevent public agencies or other private providers from choosing to do so.

In any given year, hundreds of thousands of children spend time in the U.S. foster care system, a quarter of them seeking adoption into a loving family. Yet many of these children bounce from home to home, never adopted, and enter adult life without any family ties. Foster care and adoption policy should seek to increase the number of families willing to foster and potentially adopt children. These agencies should be free to operate according to their values, as they have for decades, especially concerning their reasonable and religiously informed beliefs about marriage.

As explained in a Heritage Foundation Backgrounder report, achieving the goal of putting children first in adoption and foster care requires a public policy that provides freedom to the diverse groups that serve the needs of children: freedom to maintain licensing, recruit potential adoptive families, and find permanent, loving homes for vulnerable children.

Michigan, in particular, has had great success in placing foster care children in permanent, loving families—in part because of the good relationship the state has developed with faith-based adoption service providers. In the last year alone, 85 percent of the children in the state’s foster care system were adopted.

And yet various states have adopted policies that force faith-based providers who believe children deserve a mom and a dad out of this space, not for the sake of foster children, but out of concern for the feelings of adults. These policies do nothing but hurt children, as they unnecessarily limit the number of good agencies working on their behalf.

For example, in 2011, Illinois forced private agencies to place adoptive children with unmarried, cohabitating couples—including same-sex couples—or be stripped of state contracts. As a result, the Evangelical Child and Family Agency, numerous Catholic Charities affiliates and other faith-based organizations in the state were forced to stop serving over 2,000 children. Similar situations have happened in Massachusetts and Washington, D.C., where the redefinition of marriage—coupled with sexual orientation policies—required all faith-based providers to place children with same-sex couples.

The bills signed into law today in Michigan would prevent this from happening there.

>>> For more on this, see Ryan T. Anderson’s new book, “The Future of Marriage and Religious Liberty.”

Across the United States, there are more than 1,000 private, licensed foster care and adoption providers. Many are faith-based organizations whose religious and moral beliefs motivate their care for some of the most vulnerable children in society.

The value of faith-based communities and providers extends well beyond their ability to connect vulnerable children with loving homes or to guide prospective families through the labyrinth of the foster care and adoption systems. In addition to offering legal, administrative and material support to adoptive families and birth mothers, private and faith-based organizations often provide intangible (yet invaluable) spiritual, emotional and relational support that large, bureaucratic state-run agencies are ill-equipped to offer.

With these unique capacities, private and faith-based providers make a significant impact in joining infants, children and teens with families each year. For instance, Bethany Christian Services has been connecting vulnerable children with permanent, loving homes for almost 70 years. In 2012 alone, Bethany assisted families across the country in welcoming 656 infants into their homes, found temporary homes for over 2,200 children in foster care, and helped over 600 older foster care children find permanent families.

Protecting religious liberty in this instance takes nothing away from anyone. Couples are free to work with any private adoption provider of their choice or directly with the state offering foster care services. A diversity of providers only increases the chances more children will end up in permanent, loving families.

America’s foster care programs are in dire need of systemic reform. Foster care and adoption policy always should put the best interests of children first, and that means removing barriers to families seeking to adopt and providers seeking to place children in those loving homes. Michigan has taken a good first step in that direction today.