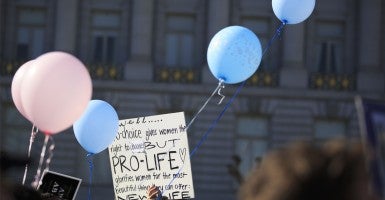 Sen. Lindsey Graham, R-S.C., introduced a measure in the U.S. Senate that would ban most abortions after the 20-week mark. (Photo: Peter Thoshinsky/Newscom)

Getting one step closer to what could be the most significant pro-life victory since the Supreme Court decision in Roe v. Wade, Sen. Lindsey Graham today introduced a measure in the U.S. Senate that would drastically limit women’s ability to access abortions past a certain point in their pregnancy.

The legislation, called the Pain-Capable Unborn Child Protection Act, passed the House in May by a 242-to-184 vote and would ban abortions after 20 weeks (approximately halfway through a pregnancy).

The bill is based on a broad consensus of research that shows unborn infants are able to feel pain 20 weeks after fertilization, and at this point, children’s hospitals throughout the U.S. “routinely” administer fetal anesthesia when performing surgery.

The measure includes exceptions for cases of rape, incest or to save the life of the mother.

“The legislation is groundbreaking, but simple at the same time,” Graham, a Republican from South Carolina, told a group of reporters today. “Does the government have a legitimate compelling interest to protect that baby? The answer, I believe, is yes.” Speaking in front of prominent pro-life leaders in Washington, D.C., Graham promised a vote on the measure this year, noting that America is only one of seven nations—in the company of China and North Korea—to allow late-term abortions.

“We’re part of a pretty exclusive club that I would like to get out of,” he said.

A Senate source told The Daily Signal that Republicans hope to vote on the legislation around the time that Pope Francis is scheduled to address a joint session of Congress on Sept. 24.

In order to become law, Graham will have to win the support of 60 senators and President Obama, who has already threatened a veto.

“[The legislation] disregards women’s health and rights, the role doctors play in their patients’ health care decisions, and the Constitution,” Obama said in an earlier statement to the press.

Tony Perkins, president of the pro-life Family Research Council, called on Obama during Graham’s press conference to “bring his policies in line with his rhetoric.”

Perkins cited a speech Obama made to the Catholic Health Association on Tuesday, in which he said:

“[E]very human being, made in the image of God, deserves to live in dignity; that all children, no matter who they are or where they come from or how much money they were born into, ought to have the opportunity to achieve their God-given potential.”

“We agree with President Obama,” Perkins said. “That potential, that opportunity, it begins with life.”

According to public opinion polls, the majority of Americans support limits on late-term abortions.

For that reason, Graham and leaders of the pro-life community hope to rally bipartisan support for the Pain-Capable Unborn Child Protection Act.

“Is there a point where we can find common ground and come together on this?” asked Marjorie Dannenfelser, president of the national pro-life group Susan B. Anthony List.

“This is the most important piece of legislation in 40 years since Roe v Wade,” she said.

Late-term abortions performed after 20 weeks, when not done by induction of labor (which leads to fetal death due to prematurity), are most commonly performed by dilation and evacuation procedures, which often involve removing the fetus with forceps or other instruments.

In 2013, a congressional report found that some 11,000 abortions take place each year at 20 weeks or more after fertilization.

Despite there being no national law banning the procedure, a number of states have taken it upon themselves to limit women’s access to late-term abortions.

>>> Read More: Where Does Your State Stand on Late-Term Abortions? Critics of the bill—including some physicians—argue the unborn child is “incapable of experiencing pain until a point later in pregnancy than 20 weeks after fertilization,” and doubt the measure would stand up to a Supreme Court challenge.

The 1973 Supreme Court case Roe v. Wade left room for states to impose limitations on abortions, so long as there’s a compelling state interest, and those restrictions do not enact an “undue burden” on the right to access an abortion.

On Tuesday, a federal appeals court upheld a strict abortion law in Texas that critics call “devastating,” and say would shut down the majority of clinics in the state.

>>> Read More: ‘Devastating’ Texas Abortion Law Could Be on Road to US Supreme Court

In the case, the court ruled that the the law does not impose an “undue burden,” on women’s ability to access abortions.

“Texas’ stated purpose for enacting H.B. 2 was to provide the highest quality of care to women seeking abortions and to protect the health and welfare of women seeking abortions,” read the ruling by the 5th Circuit Court of Appeals in New Orleans. “There is no question that this is a legitimate purpose that supports regulating physicians and the facilities in which they perform abortions.”

When asked whether the Pain-Capable Unborn Child Protection Act would stand up in a similar fashion, Graham said:

“I think science is on our side and I think law will be on our side.”