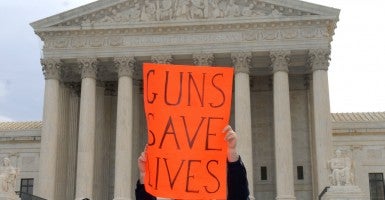 A pro-gun advocate stands outside of the Supreme Court during the District of Columbia v. Heller case in March, 2008. (Photo: Kevin Dietsch/UPI)

Gun owners in the city filed the appeal in an attempt to overturn a requirement that all handguns be “stored in a locked container or disabled with a trigger lock” when they are not being carried.

The case, Jackson v. City and County of San Francisco, would have prevented local governments from restricting the Second Amendment.

In the San Francisco case, Justice Antonin Scalia joined Justice Clarence Thomas in dissent, arguing the Supreme Court should have reviewed the case based on the two previous rulings.

“It leaves gun owners seeking to protect themselves and their families inside their own homes—a right recognized by the Supreme Court in Heller and McDonald—less able to defend themselves should armed intruders break into their home in the middle of the night,” he said.

Thomas opened his dissent citing the McDonald case, which said “self-defense is a basic right” and “the central component” of the Second Amendment.

“Less than a decade ago, we explained that an ordinance requiring firearms in the home to be kept inoperable, without an exception for self-defense, conflicted with the Second Amendment because it “ma[de] it impossible for citizens to use [their firearms] for the core lawful purpose of self-defense,” Thomas continued, citing Heller.

Thomas called San Francisco’s law a “significant” burden, detailing the story of one of the petitioner’s, an older woman who lives alone and must “turn on the light, find [her] glasses, find the key to the lockbox, insert the key in the lock and unlock the box … and then get [her] gun before being in position to defend [herself].”

Malcolm believes the Supreme Court’s refusal to review the case is a missed opportunity.

“Let’s hope that the Supreme Court finds another occasion to bring some much needed clarity to the scope of this long-ignored and much-derided liberty interest that is a birthright of all law-abiding Americans as set forth in the Bill of Rights,” Malcolm said.