Winston Churchill, Abraham Lincoln and the Fragility of Freedom 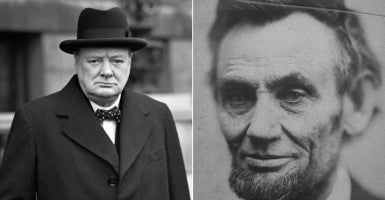 As noted in my recent essay, “Champion of Liberty: Winston Churchill and His Message to America,” both were leaders of democracies in wartime and had to make the case their causes were worth fighting for, resistance was both sensible and praiseworthy, and citizens should prefer struggle and sacrifice over capitulation. Both men connected the life of their regimes compellingly to a noble cause.

In fact, Churchill believed himself to have much in common with Lincoln, specifically regarding their common belief in the sovereignty of the people and the necessity of defending freedom courageously in a world often hostile to popular governments.

Speaking before a joint session of Congress in late December 1941, Churchill proclaimed a unity of political faith: “ … I have been in full harmony all my life with the tides which have flowed on both sides of the Atlantic against privilege and monopoly, and I have steered confidently towards the Gettysburg ideal of ‘government of the people by the people for the people.’ In my country, as in yours, public men are proud to be the servants of the State and would be ashamed to be its masters.”

That central idea of the sovereignty of the people was the centerpiece of Churchill’s appeals to America. Throughout a lifetime of interaction with the United States, Churchill wished always to dwell on the essential political harmony of the two nations because he knew that common action was made possible only through common purpose sprung from common principle.

Churchill’s wartime rhetoric braced the people of Britain for the struggle ahead by reminding them their sacrifices served the cause of freedom. By referencing Lincoln, Churchill extended that appeal to the United States, seeking to call forth that historic devotion to action in the name of freedom that always had been the hallmark of the American spirit. Churchill understood nations devoted to liberty must stand up boldly for it.

At the core of Churchill’s statesmanship was his unceasing call to the world to adopt just political principles, especially those that are the legacies of the Anglo–American political tradition. In this way, the Anglo-American political faith was both a fighting faith and a ministering faith: Tyrannized peoples must be encouraged to adopt the principles of political freedom themselves. It was the duty and the privilege of the English-speaking peoples to convey that political message to the world.

As Lincoln spoke at Gettysburg, he reminded his audience that the work of freedom was not yet finished, and yet more sacrifice would be required. Churchill’s rhetoric also emboldened his listeners to face war and danger and death rather than see the lights of freedom die.

This is the essence of the message of these two statesmen: The conditions of freedom do not simply occur, and they do not simply persist. Humanity must fight to establish them, struggle to maintain them and sacrifice to defend them. This message is no less true today that it was in 1863 or 1941.