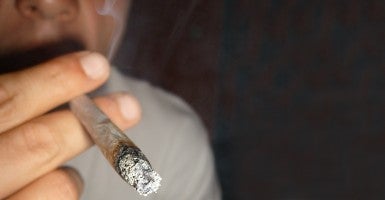 De Beque, Colo., is little more than an outpost nestled along I-70 as it winds its way through the rugged hills of western Colorado. Clearly visible from the highway is the quirky façade of Kush Gardens, the first recreational pot shop to be approved in Mesa County.

After the resounding passage in November 2012 of Amendment 64, the law which made recreational pot legal in Colorado, many counties and cities in the state quickly placed moratoriums on the commercial growing and retail marketing of cannabis. Mesa County’s Board of Commissioners passed such a moratorium shortly after the election in 2012, but in 2014, officials in De Beque took up the matter and opted to allow commercial pot interests to operate in their town.

A town built on oil and gas, mining and agriculture, De Beque has suffered a series of economic blows, first because of the recession of 2008, then onerous clean air regulations handed down by the EPA which drove up the cost of exploration and extraction of fossil resources, and, most recently, the drop in gas prices which made it unviable for many oil and gas companies to operate in the area. The hemorrhaging of jobs and oil and gas revenues likely made the temptation of cannabis tax revenues irresistible for a town struggling against extinction.

Retail marijuana was not the first choice among De Beque’s stop-gap economic measures. Early in 2014, the town lobbied the state to establish what would be western Colorado’s only gambling casino. After state legislators quashed plans for a casino along the I-70 corridor, in April 2014, residents of De Beque voted narrowly to welcome retail cannabis into their town.

But the saga of De Beque is more than that of an economically strapped small town glomming onto a means of survival. Retail recreational cannabis is changing Colorado’s social, economic and political landscapes in ways that few could have imagined.

Amendment 64 was approved of by 55 percent of Colorado voters in 2012. Promoted as a revenue-generating “regulate marijuana like alcohol” measure, its passage and ensuing repercussions caught many by surprise. Regulating marijuana like alcohol, it appears, is a breathtaking oversimplification of what is required to turn an illegal intoxicant into a viable commodity. The citizen-led ballot initiative behind Amendment 64 went beyond simple decriminalization and created a new civil right by encoding the possession and use of pot into the Colorado State Constitution.

Following the amendment’s passage, Colorado had just six months to create a legal and regulatory framework for the growing, sale and distribution of recreational cannabis. At that time, medical marijuana, which was recognized by the state in 2000, remained largely unregulated, lacking rules governing dosage, purity, growing practices, etc.

Amendment 64 provided some guidelines regarding what amounts of pot could be legally possessed, how many plants could be grown under what circumstances, etc., but the Colorado Department of Revenue was tasked with licensing and regulating all recreational and medical cannabis operations. Critical matters beyond fees and licensing criteria were overlooked, including agricultural issues such as pesticide use and the impact of outdoor growing facilities on other crops.

Agriculture is a dominant economic driver in most of Colorado’s small towns outside of the Front Range cities of Boulder, Denver and Colorado Springs. With cannabis still illegal under federal law, a dearth of information about what pests attack cannabis and what pesticides can be used safely on the plants has resulted in confusion, and in some cases, dangerous growing practices.

In March of this year plants at several growing facilities in the Denver area had to be quarantined because of the misuse of “pesticides.” The pesticides, it turns out, were improvised concoctions of chemicals, including some unidentifiable mixtures. Cannabis growers have been left to improvise since no commercial pesticides are labeled for legal use on cannabis plants.

Some farmers have expressed alarm over the potential of marijuana growing operations in close proximity to established crops. Plans for a medical marijuana facility in Palisade, a tiny farming town whose main crop is peaches, have peach growers worried about the potential spread of pests, molds and fungi from cannabis to their established orchards. The agricultural implications of the cannabis industry, it seems, were not a consideration at the time it became a legal crop.

The wave of enthusiasm following the passage of Amendment 64 has given way to a drip, drip, drip of unintended consequences. Law enforcement issues, such as marijuana-intoxicated driving and the illegal movement of vast amounts of cannabis product into other states, are the tip of the iceberg. Social and law enforcement issues resulting from the Colorado interstate pot pipeline prompted Nebraska and Oklahoma to file lawsuits against the state, citing the fact that marijuana commerce violates federal law and increases the burdens of law enforcement in other states. Other symptoms of Colorado’s pot culture include increased use among teens, resulting in educational problems in middle schools and high schools, a spike in “edibles”-related emergency room visits, consumption by children and pets resulting in illness and death and regulatory confusion surrounding public consumption and enforcement.

Colorado’s addiction to cannabis revenue may prove to be the most harmful implication of all. Towns such as De Beque, where cannabis is replacing coal and cattle as a means of income, imperil themselves by staking the future on a substance which is still illegal in most states and which half of Americans still regard as a social evil.

In 2014 and 2015, nearly $6 million in pot revenues have been distributed to local governments. But the cost of increased law enforcement, drugged driving incidents, fatal crashes, loss of productivity and a huge spike in gang-related crime bring into question the cost-benefit of those dollars. Teen drug-related school expulsions are also on the rise. And the notion that prisons filled with minor drug offenders would be relieved of overcrowding—a selling point of legalizing marijuana—has been blown to smithereens. Denver’s homeless population has exploded since Amendment 64 went into effect. And there are indications that finite tourist dollars are going more to pot and less to Colorado’s iconic natural wonders.

Cannabis is an intoxicant, proven to be dangerous to adolescents who use regularly, as well as adults who are addicted to its calming, high-producing chemical, THC. But building a tax empire on a narcotic substance may be a dangerous proposition for the Centennial State. Colorado’s Cannabis-Industrial Complex cannot sustain a complex economy traditionally built on natural resources, agriculture, innovation and family-friendly tourism. The eyes of other states eager to legalize pot should be firmly fixed on the unfolding saga of towns such as Denver, Boulder and De Beque, Colo.