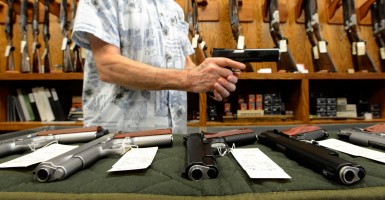 Making clear its official stance against Operation Choke Point, the House passed a measure that prohibits the Justice Department from using any funds to carry out the controversial program. Critics say it unfairly targets legal businesses like pawn shops, gun dealers and payday lenders.

On Wednesday, lawmakers approved the Commerce, Justice, Science, and Related Agencies Appropriations Act, which allocates funding to a range of agencies and also includes a provision to defund Operation Choke Point.

“While I had hoped that the unprecedented Operation Choke Point would have been far behind us by now, it was once again necessary to offer an amendment to the annual Commerce, Justice, and Science Appropriations legislation to prohibit funding for it,” said Rep. Blaine Luetkemeyer, R-Mo., who sponsored the amendment.

My colleagues and I will continue to ensure [the Justice Department] and FDIC enforcement actions are focused on actual threats and risks and not politics and ideology as we continue to move forward with the fight to end this illegal program once and for all.

After failed past attempts by Congress to end Operation Choke Point, members this time are “hopeful” this strategy will work.

“The House has done its job and now we hope the second legislative branch and the executive branch will join us on behalf of standing up for the American people,” Rep. Scott Tipton, R-Colo., a member of the House Financial Services Committee, which has been critical of Operation Choke Point, told The Daily Signal.

Operation Choke Point was launched by the Justice Department in 2013 as a way to combat consumer fraud by working with multiple government agencies—among them, the Federal Deposit Insurance Corporation—to discourage banks from doing business with “high risk” industries.

Since its inception, critics say the program is being used to drive industries that are politically unpopular out of business.

In order to stop Operation Choke Point, the House is aiming to prohibit the Justice Department from using any of its money to fund the program.

To be successful, the Senate, too, must vote in favor of the Commerce, Justice, Science, and Related Agencies Appropriations Act, or an alternative way of funding these agencies.

When it does, the Senate will be forced to dispense with or adopt the House’s Operation Choke Point amendment.

Tipton says his constituents back home in Colorado have been affected by the program first-hand.

“We do have payday lenders, gun shops, pawn shops in our part of the world—which are very essential to our economy—being concerned about an aggressive overreach by this administration,” he said.

Tipton says his constituents also view Operation Choke Point as “another example” of government overreach into their private lives.

“It’s systemic out of the Obama administration, where they’re continuing to push for more rules, more regulation, which have the full effect of law,” he said.

[Operation Choke Point] just becomes a building case, be it at the IRS, the EPA, the Department of Interior, the Department of Justice, the FDIC … of encroachment on personal liberty and on private business models that are operating in a very honest [and] legal manner.

Tipton, along with his fellow Republicans on the House Financial Services Committee, expect agencies like the Federal Deposit Insurance Corporation that have been involved in executing the program to hold their employees accountable for admitted “mistakes.”

>>> Read More: Republicans to Government Official: Why Has No One Been Fired Over Operation Choke Point?

Thus far, no employee of the Federal Deposit Insurance Corporation implicated in congressional reports of Operation Choke Point has been fired.

“If you don’t pay your taxes, the government is right there to enforce it. If you go over the speed limit, we’ve got laws and you’re going to have to pay a price,” Tipton said. “The American people, just as citizens, are held to a certain level of accountability and the government should be no less.”