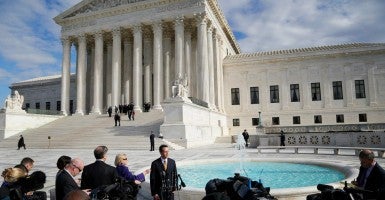 The case of Anthony Elonis, who was convicted in 2010 of making violent threats on Facebook, was argued at the Supreme Court in December. Here, an advocate for victims' rights speaks with reporters about the case. (Photo: Jonathan Ernst/Reuters/Newscom)

Rap music is not your grandmother’s show tunes. Its lyrics have been characterized as off-color, profane, violent and misogynistic.

Recently, the Supreme Court was asked to decide whether rap lyrics with those characteristics that focused on particular individuals constituted “threats” for purposes of the federal criminal law. More specifically, the question was whether the federal law that makes it a crime to communicate a threat in interstate commerce requires the government to prove the defendant intended to communicate a threat or whether it is sufficient for the government to prove a reasonable person would have treated the defendant’s lyrics as threatening, regardless of what the defendant intended.

In 2014, The Heritage Foundation published a paper, which I co-authored, that argued the best interpretation of the statute was that it requires proof of a subjective intent to threaten someone else. In Elonis v. United States, the Supreme Court agreed.

After his wife left him, Anthony Douglas Elonis posted rap music-style lyrics on Facebook that he composed containing graphically violent language and imagery involving co-workers, a kindergarten class and state and federal law enforcement officers. Charged with violating a federal law making it a crime to communicate a “threat” in interstate commerce, Elonis argued that he did not intend to threaten anyone and was merely using extreme language as an exercise of his free speech rights.

The trial court instructed the jury it should convict Elonis if a reasonable person would have understood his posts as threatening, regardless of what Elonis intended. The jury so found and convicted him. By a 7-2 vote (Justice Alito dissented in part, and Justice Thomas dissented in full), the Supreme Court reversed Elonis’ conviction.

Writing for the court, Chief Justice John Roberts ruled the trial judge should have instructed the jury that it could convict Elonis only if it found he subjectively intended to communicate a threat. Reaching back to Justice Robert Jackson’s 1952 opinion in Morissette v. United States, Roberts started from the proposition that negligence may be sufficient to establish tort liability, but “‘wrongdoing must be conscious to be criminal,’” a concept expressed through terms such as mens rea, scienter, malice aforethought, guilty knowledge and so forth.

That principle, he explained, was so well-settled that it established a presumption that a federal criminal statute should be read to require some proof of knowledge of facts amounting to wrongdoing and that when federal criminal statutes are silent on the required mental state, they should be read to include “only that mens rea which is necessary to separate” wrongful from innocent conduct.

Moreover, to ensure criminal law does not capture parties who do not intend to flout the law, “the presumption in favor of a scienter requirement should apply to each of the statutory elements that criminalizes otherwise innocent conduct.” The jury instructions were erroneous, he concluded, because they permitted Elonis to be convicted for negligently failing to realize that someone might find his remarks threatening.

The Supreme Court’s Elonis decision is yet another welcome example of the correct way to interpret a federal criminal statute, and, more importantly, represents a significant safeguard against overcriminalization. The decision does not bar Congress from using a negligence standard (or some other standard) in this category of cases (or any others), but it makes clear that, unless Congress is quite clear as to what a statute requires the government to prove, federal courts should read those laws to demand proof of conscious wrongdoing as an element of a federal criminal offense.