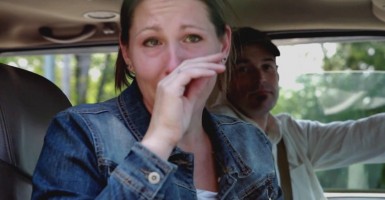 The Daily Signal has exclusively learned that the government agency responsible for enforcing Oregon’s anti-discrimination law appears to be working closely with a powerful gay rights advocacy group in its case against Aaron and Melissa Klein, owners of Sweet Cakes by Melissa.

Communications between the agency, the Oregon Bureau of Labor and Industries, and the LGBT organization, Basic Rights Oregon, raise questions about potential bias in the state’s decision to charge the Kleins with discrimination for refusing to make a cake for a same-sex wedding.

In April, a judge for the agency recommended the Kleins be fined $135,000.

Communications obtained through a public records request show employees of the Oregon Bureau of Labor and Industries—which pursued the case against the Kleins—participating in phone calls, texting, and attending meetings with Basic Rights Oregon, the largest LGBT advocacy group in the state.

“State agencies have a duty to represent the best interests of the general public, not the interests of one particular advocacy group,” said @HvonSpakovsky.

State agencies have a duty to represent the best interests of the general public, not the interests of one particular advocacy group. The relationship shown by these communications is inappropriate and raises basic questions about the objectivity, bias, and fairness of this agency and its proceedings.

It is unclear what occurred during these meetings and phone calls, but the Oregon Bureau of Labor and Industries commissioner, who is in charge of determining the Kleins’ final punishment, met with Basic Rights Oregon on multiple occasions and purchased tickets costing hundreds of dollars benefiting the advocacy group.

In a statement to The Daily Signal, Charlie Burr, communications director for the Bureau of Labor and Industries, said the agency and its commissioner are “committed to fair enforcement” of the state’s anti-discrimination measure.

“We are committed to fair enforcement of the Oregon Equality Act of 2007 and other civil rights protections,” Burr said via email on Friday. “In each case, we investigate the unique set of facts to determine whether substantial evidence exists.”

But unearthed emails appear to challenge that narrative, and based on The Daily Signal’s findings, lawyers for the Kleins on Friday requested the case be re-opened for further investigation.

The State’s Case Against Sweet Cakes by Melissa

The Oregon Bureau of Labor and Industries is in charge of defending the state’s Equality Act of 2007, which prohibits businesses from refusing service to customers based on their sexual orientation, among other characteristics.

When claims of discrimination occur, plaintiffs must file a complaint with the bureau.

Rachel and Laurel Bowman-Cryer (who have since married) filed a complaint against Sweet Cakes by Melissa in February 2013, a month after the Kleins refused to make a cake for the couple’s same-sex wedding.

At the time, same-sex marriage was not legal in Oregon, and Basic Rights Oregon was in the process of gathering signatures to bring the measure to the ballot in the upcoming 2014 election.

Oregon began recognizing same-sex marriages from other states in October of 2013, and on May 19, 2014, a federal judge struck down the ban, legalizing gay marriage.

The Bureau of Labor and Industries waited until August 2013 to open its investigation into Sweet Cakes by Melissa, six months after the agency received the initial complaint from Rachel and Laurel Bowman-Cryer. Aaron and Melissa Klein, owners of Sweet Cakes by Melissa, were forced to close their bakery after facing boycotts and coming under public backlash. (Photo: Patchbay Media)

Communications between Bureau of Labor and Industries Commissioner Brad Avakian and Basic Rights Oregon, which has actively spoken out against the Kleins, raise questions about whether the commissioner and other agency employees were using the case to benefit a political agenda, and in the process, stripping the Kleins of their right to a fair trial.

According to emails, Avakian met with Basic Rights Oregon on multiple occasions.

One of those meetings was planned for May 1, 2014, shortly before a federal court struck down Oregon’s Defense of Marriage Act.

Another meeting between the commissioner and Basic Rights Oregon occurred on or around August 5, 2014. This fell between the time a judge denied the Kleins’ first attempt to disqualify the commissioner for bias and shortly before a hearing for the case was scheduled to begin.

On or around Oct. 7, 2014, Avakian accepted a phone call from Jeana Frazzini, co-director of Basic Rights Oregon, according to another email.

On Dec. 2, 2014, a Basic Rights Oregon employee wrote of Avakian, “His voice is really important as a coalition partner, and a leader in Oregon politics.”

Avakian is a hugely important figure in the Kleins’ case—he will determine the fine amount the Kleins ultimately pay.

This April, Administrative Law Judge Alan McCullough, who was appointed to his position by Avakian and is also employed by the Oregon Bureau of Labor and Industries, issued a “proposed order” for the case against Sweet Cakes by Melissa.

McCullough recommended the Kleins pay $135,000 to Rachel and Laurel Bowman-Cryer, saying the Kleins imposed mental, physical and emotional damages upon the lesbian couple by refusing to serve them.

Now, Avakian must issue a final ruling on the case, and in doing so, he “can adopt all or any part” of McCullough’s proposed order. Avakian is expected to issue that order this summer, when the Kleins will then have the opportunity to file an appeal.

Von Spakovsky, who is a critic of the administrative law process, says the relationship between Avakian and an activist group would be an obvious ethics violation in a normal court system.

“The problem with administrative law judges appointed by a government agency is that they have an inherent conflict of interest—the agency is acting as judge, prosecutor, jury, and executioner, which is a basic violation of fundamental due process protections,” he said.

The whole point of having an independent judiciary is to separate the judicial and prosecutorial functions and avoid this type of conflict.

In addition to Avakian’s relationship with Basic Rights Oregon, Charlie Burr, communications director for the Oregon Bureau of Labor and Industries, appears to have worked closely with the gay rights organization in shaping the media’s narrative of the case.

On April 30, 2015, Burr forwarded a conversation to Basic Rights Oregon between himself and an editorial board member for The Oregonian newspaper—related to the Sweet Cakes by Melissa case—with the memo, “FYI.”

In the email, Burr attempted to make clear to the editor that the final order was not an “opportunity” for Avakian to “show leadership,” but rather, to make a decision “that best serves justice based on the unique facts of the case.” “The fact that a state agency is turning over its communications between itself and a major media outlet proves they’re acting in concert with a private advocacy group,” von Spakovsky said.

Burr routinely ignored press inquires from The Daily Signal about the Sweet Cakes by Melissa case, but proactively informed Basic Rights Oregon of updates in the case, sometimes via text. The relationship between the Oregon Bureau of Labor and Industries and Basic Rights Oregon came to light during a hearing that was held on February 13, 2015.

Concerned that the Bureau of Labor and Industries was working with Basic Rights Oregon to figure out how the case fit into the broader debate over marriage equality in Oregon, the Kleins’ lawyer, Anna Harmon, asked a brother of one of the complainants why the lesbian couple decided to pursue the legal case against the bakery.

Aaron Cryer, the brother of Rachel Bowman-Cryer, was a witness to the case because he was living with the couple at the time of the alleged discrimination.

“There was a point in time where [the Bureau of Labor and Industries] was unsure on whether or not we should pursue the case right now or wait, just because of marriage equality in Oregon becoming a thing, and we were looking at the scope as a bigger whole. Because the whole reason of pursuing this case is to change these behaviors,” Aaron Cryer said.

A prosecutor for the Bureau of Labor and Industries later appears to encourage Aaron Cryer to “clarify” his statement about the bureau’s intentions in pursuing the case.

“Do you recall Basic Rights Oregon reaching out to Laurel and Rachel?” the prosecutor asked.

“[The Bureau of Labor and Industries] and Basic Rights Oregon. I think I kind of put the two together,” Aaron Cryer said. “Basic Rights Oregon was the organization that me and Laurel and the rest of the family had a conversation about, about pursuing the case, if I remember correctly.” Suspicious of potential collusion, Harmon, the Kleins’ lawyer, requested the judge allow her to further investigate the state’s relationship with Basic Rights Oregon.

“We argued that because of Aaron Cryer’s testimony, the judge should allow us to re-depose the complainants and even people at BOLI [Bureau of Labor and Industries] to figure out exactly what happened and if there was any collusion,” Harmon told The Daily Signal.

On Friday, based on The Daily Signal’s records request, Harmon again requested the judge re-open the record and allow them to seek more information.

“Aaron Cryer’s testimony, combined with that knowledge, causes us to wonder to what extent, if any, the commissioner was working with Basic Rights Oregon and the complainants in the preliminary stages of this case,” she said.

Any such collusion would show that the decision maker in this case was not neutral, and the State of Oregon would have violated the Kleins’ fundamental constitutional right to due process of law. We have a right to know what went on, and we’re asking the ALJ [administrative law judge] to allow us to find out. In some ways, the information The Daily Signal obtained is nothing new.

That knowledge dates back to February 2013, when Avakian publicly accused Aaron and Melissa Klein of breaking the law before hearing any evidence.

Everyone has a right to their religious beliefs, but that doesn’t mean they can disobey laws that are already in place….

Despite sensing from the beginning that the “the fix was in,” the Kleins and their attorneys are hopeful this new batch of communications will be enough to prove bias in the case.

If the judge denies the request to re-open the record and the commissioner moves forward in issuing a final order solidifying the $135,000 fine, the Kleins vow to continue their fight to live out their religious beliefs in the workplace.

“We absolutely have the right to appeal and intend on preserving those rights,” Harmon said.