What You Need to Know About the House’s Obamacare Lawsuit 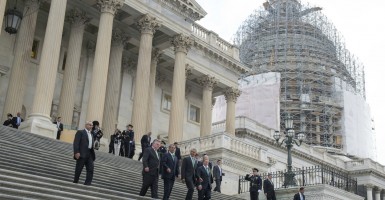 The U.S. House of Representatives had its first day in court today after filing a lawsuit against the Obama administration for making unilateral changes to the Affordable Care Act in November. Now, a district judge must rule on whether the case will proceed.

Lawyers representing the Obama administration and the House of Representatives gathered today before U.S. District Judge Rosemary Collyer for the first hearing in a lawsuit challenging President Obama’s changes to the health care law—namely his delay of the employer mandate and the authorization of payments from the Treasury Department to insurance providers.

Congress, the House of Representatives contends, did not appropriate funds for those payments, which will cost taxpayers more than $175 billion over the next 10 years.

The House and its lawyer, George Washington University law professor Jonathan Turley, argue these changes to the law violate the Constitution and are suing the Departments of Treasury and Health and Human Services.

“In challenging these actions, this case addresses fundamental issues regarding the limits of executive power under our constitutional form of government, and the continued viability of the separation of powers doctrine upon which ‘the whole American fabric has been erected,’” Turley wrote in documents filed with the U.S. District Court for the District of Columbia. “This lawsuit thus raises issues of exceptional importance, not only to plaintiff United States House of Representatives, but also to the entire nation.”

Justice Department lawyers, led by Joel McElvain, motioned to have the lawsuit dismissed on the basis that the House lacks the legal standing to challenge the administration in court.

McElvain and the government argue U.S. law mandates that the House is required to prove it has been harmed in order to have standing.

“The U.S. House of Representatives now asks this court to decide a generalized, institutional dispute between the executive branch and one chamber of the legislative branch concerning the proper interpretation of federal law,” McElvain argued in documents filed with the court.

“This novel tactic is unprecedented, and for good reason: the House has no standing to bring this suit.”

However, according to several reports, Collyer—who was appointed by President George W. Bush—repeatedly pushed McElvain today over his arguments for why the case should be dismissed.

“So is it your position that if the House of Representatives affirmatively voted not to fund something … then that vote can be ignored by the administration, because after all, no one can sue them?” Collyer asked McElvain.

Despite her pressure on the government, Collyer has not yet ruled on whether the case will be dismissed.

In an interview with The Daily Signal, Hans von Spakovsky, senior legal fellow at The Heritage Foundation, pointed to the constitutional infringements cited by the House as reason for why the case should proceed.

“This makes it a very basic constitutional issue, which is that the executive branch cannot spend money unless it’s been specifically appropriated by Congress. That’s been true for the 200 plus years we’ve been a country, no matter what the issue is,” said @HVonSpakovsky.

“This lawsuit talks about specific injury and a specific misuse of funds by the executive branch,” he said. “This makes it a very basic constitutional issue, which is that the executive branch cannot spend money unless it’s been specifically appropriated by Congress. That’s been true for the 200 plus years we’ve been a country, no matter what the issue is.”

Von Spakovsky went on to cite the authorization of the lawsuit by the full House as further evidence the lower chamber has standing.

“This throws this case on a completely different plane,” he said, contrasting this case with others in which just one or two lawmakers—such as Wisconsin Republican Sen. Ron Johnson’s attempt to sue the administration—file suit.

However, Timothy Jost, a professor at the Washington and Lee University School of Law, said the House cannot prove it has been harmed, which is required under U.S. law.

“It has the power of the purse and the power to hold investigatory hearings, which it’s exercising,” Jost continued. “It’s not legitimate for [the House] to sue the courts to force the administration to do what it wants it to do.”

House Speaker John Boehner first announced he would pursue a lawsuit against the Obama administration in July 2014, which the House voted to authorize. The lawsuit was postponed until November, though, after two lawyers who initially represented the lower chamber dropped out. Turley is now representing the House.

“The very fact that the administration wants to avoid scrutiny—judicial or otherwise—shows you why this challenge is important,” Boehner said in a statement yesterday. “No one—especially the president—is above accountability to the Constitution and the rule of law.”

Republicans in both chambers of Congress have frequently criticized the president for unilaterally changing different provisions of Obamacare without consulting Congress, and this case is one of many filed against the administration over the health care law.