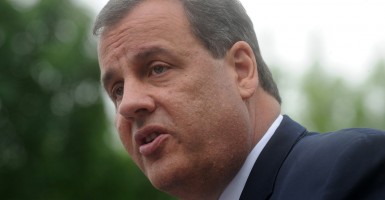 New Jersey Gov. Chris Christie says he will pull the state out of Common Core education standards—increasingly unpopular among parents and teachers alike—in favor of “higher, New Jersey-based standards” to be developed by the end of the year.

He has asked the state’s top education official to convene parents, teachers and educators to drive development of the stronger standards, Christie said. But the governor dismayed some by stopping short of discarding a controversial test designed to assess how well students learn under the Common Core standards.

“It’s now been five years since Common Core was adopted. And the truth is that it’s simply not working,” Christie said Thursday afternoon in a speech at Burlington County College in Pemberton, N.J. “It has brought only confusion and frustration to our parents. And [it] has brought distance between our teachers and the communities where they work.

“Instead of solving problems in our classrooms, it is creating new ones,” the governor said.

Christie, who initiated a study of the contentious standards last July, becomes the latest Republican governor to pull his state from Common Core.

One of those other governors, Louisiana’s Bobby Jindal, has taken the federal government to court over what he calls a scheme to use federal funds to coerce states into signing up for Common Core. An initial hearing in that lawsuit was set for today, Time magazine reported.

“It is time to have standards that are even higher [than Common Core] and come directly from our communities,” @GovChristie says.

Christie and Jindal are both likely GOP candidates for president. Christie’s move leaves two other major, unannounced contenders for the Republican nomination, Ohio Gov. John Kasich and former Florida Gov. Jeb Bush, as the most prominent GOP hopefuls who haven’t disavowed Common Core as a vehicle for Washington to have a role in state education choices. In the Democrats’ contest, the issue has yet to become a litmus test for Hillary Rodham Clinton and any challengers.

I have heard far too many people—teachers and parents from across the state—that the Common Core standards were not developed by New Jersey educators and parents. As a result, the buy-in from both communities has not been what we need for maximum achievements. I agree: It is time to have standards that are even higher and come directly from our communities. And, in my view, this new era can be even greater by adopting new standards right here in New Jersey—not 200 miles away on the banks of the Potomac River.

However, Christie puzzled some parents and teachers by saying the state for now would retain the hotly debated test known as PARCC (Partnership for Assessment of Readiness for College and Career).

“We must continue to review and improve that test based on results, not fear or speculation,” Christie said. “I will not permit New Jersey to risk losing vital federal education funds because some would prefer to let the perfect get in the way of the good.  We must test our children because federal law requires it and because it is the only way to objectively judge our progress.”

“If @GovChristie is genuinely interested in new standards, the state must abandon the PARCC fiasco,” @NJEA chief says.

Common Core proponents argue that PARCC and similar assessments are the best way for the federal government to ensure that states faithfully implement the standards.

Wendell Steinhauer, head of the state teachers union,  said Christie was being “completely illogical” in calling for rejection of Common Core while continuing the PARCC assessments tied directly to those standards.

If the governor is genuinely interested in new standards, the state must abandon the PARCC fiasco, which is taking a terrible toll on the quality of instruction and student learning in New Jersey. It is completely illogical to use this deeply flawed test if the administration is going to abandon the standards that are driving it.

Christie said David Hespe, head of New Jersey’s Department of Education, would lead a group to develop a new set of standards.

The group is expected to complete a review of previous state standards and make any recommendations by the end of the year. Christie aides said the review would consider:

“I have some real concerns about Common Core and how it’s being rolled out and that’s why I put a commission together to study it,” Christie said in November. “I’m not an educational expert.”

New Jersey, along with 45 other states, adopted the Common Core standards in 2010 as a way to ensure their students are “college- and career-ready,” and to track student success in a way that’s comparable state by state.

Some critics say PARCC and other exams associated with what they see as questionable standards for math and language are too rigorous, and usurp local and state control of the classroom.

“@GovChristie is keeping the PARCC testing, which is the heart of Common Core in this state,” Steve @Lonegan says.

Steve Lonegan, a former mayor who ran against Christie in the 2009 GOP primary for governor, was skeptical.

“Christie has suddenly had an epiphany on Common Core because he’s trying to send a signal to Republican primary voters,” Lonegan, whose wife and daughter are teachers, told The Daily Signal.

Despite “a lot of flowery rhetoric about parents and children,” Lonegan said, “in the really important part of the speech [Christie] says he’s keeping the PARCC testing, which is the heart of Common Core in this state.”

Common Core is about teaching to the test and not the individual needs of the student. Common Core is a one-size-fits-all approach that dumbs down education.

Opponents also argue that the Obama administration gave states an incentive to adopt Common Core and affiliated exams with $4.35 billion in “Race to the Top” grants and waivers from the No Child Left Behind law.

In many states, education experts note, the hurried adoption of Common Core preceded the elections of 2010, which brought in new governors, legislators and school board members. Christie first took office in January 2010, Jindal in January 2008.

“Over the last two years, states have begun to realize the costs of quickly signing on to Common Core,” Brittany Corona, now state programs director for the Friedman Foundation for Educational Choice, wrote earlier this year for The Heritage Foundation. She added:

By 2015, 15 of the original 46 states that agreed to Common Core have made efforts to withdraw from the standards and aligned tests. Four exited the standards completely—Indiana, Oklahoma, South Carolina and Louisiana.

Now, Corona said, the alignment of college entrance exams, such as the SAT and ACT, and advanced placement courses have prompted concern over the “voluntary” nature of the standards.

Kevin Mooney contributed to this report, which has been updated.