EPA’s Shocking Actions to Gain Support for Its Water Rule 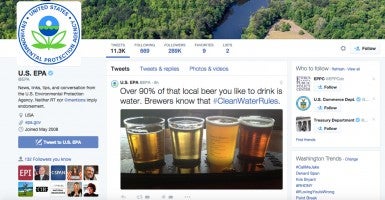 There’s now another issue with the controversial water rule proposed by the Environmental Protection Agency and the Army Corps of Engineers.

The Environmental Protection Agency wants you to think there’s a lot of support for the proposed water rule that seeks to give the agency and the Army Corps jurisdiction over almost every water. Reportedly, the agency may cite this “overwhelming” support when it releases its final rule any day now.

In March, Environmental Protection Agency Administrator Gina McCarthy told the Senate Environment and Public Works Committee, “We have received over 1 million comments, and  87.1 percent of those comments we have counted so far—we are only missing 4,000—are supportive of this rule.”

Before proponents (the agency, Army Corps, and perhaps some of their friends and family members) get too excited, the pronouncement of support is misleading.

McCarthy failed to mention the Environmental Protection Agency engaged in controversial activities to help get support for the rule. Some have claimed these activities may even be illegal.

For example, the agency used a Thunderclap campaign to drum up support using social media. “We hope you’ll support our clean water proposal. To help you do that, and get your friends to also voice their support, we’re using a new tool called Thunderclap; it’s like a virtual flash mob.” The message was sent to about 1.8 million people.

The agency also has used social media in other ways to help promote the rule.

According to The New York Times, “Late last year, the EPA sponsored a drive on Facebook and Twitter to promote its proposed clean water rule in conjunction with the Sierra Club.”

The Environmental Protection Agency also developed a video to promote the rule, asking the question “Do you choose clean water?” As if critics of the rule want dirty water. On top of this, McCarthy has dismissed some public concerns about the rule as “ludicrous” and “silly.”

As seen through these examples, the Environmental Protection Agency has been acting more like an advocacy group than a federal agency that is supposed to welcome comments from all sides. It has tried to influence the comments that were received. When the agency uses its massive resources to get support for its rule, it shouldn’t be a surprise when it receives comments that support the rule.

After receiving heat about these questionable actions, the agency defended itself by claiming, “Our goal is to inform and educate. We encourage folks from all perspectives to participate so we can understand more, learn more and finalize a stronger rule.”

An agency isn’t educating when it’s actively trying to gain support for its rule and using numerous social media outlets to advocate. Suggesting support for the proposed rule is the same as supporting clean water isn’t education; it’s rhetoric.

The agency isn’t encouraging folks from all perspectives to participate when the head of the agency calls some public concerns ludicrous and silly. The message to the public is don’t even bother expressing criticism because we will either mock it or ignore it.

Of course, the number of comments isn’t supposed to matter anyway. As the agency itself states, “The comment process is not a vote—one well-supported comment is often more informative to the agency than a thousand form letters.” In fact, most of the comments were form letters (there were more than 1 million mass mail comments).

McCarthy also fails to mention opposition to the rule is massive. Groups representing farmers, ranchers, small businesses, manufacturers, homebuilders, mining companies, counties, cities and state legislators, as well as individuals, state officials and other groups have submitted substantive comments expressing opposition to the rule. In other words, there is widespread opposition rarely seen to a proposed rule.

The rulemaking process is supposed to be open and welcoming for the public. It should not be gamed by an agency.

If we are talking about support for a rule, form letters don’t provide any answers, and the agency knows this. These desperate actions by the agency are understandable (not justified) when their rule is one of the most widely reviled in recent memory.