Here’s the Data to Prove School Choice Is Working 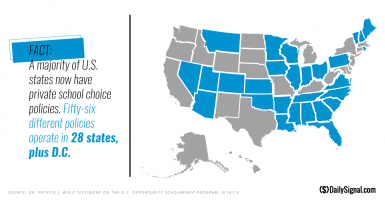 In the United States today, 56 different school choice policies exist in 28 states plus the District of Columbia, and the number of choice policies has approximately doubled every four years from 2000 to 2012. The District of Columbia Opportunity Scholarship Program remains the nation’s only federally sponsored private school choice initiative. It provides scholarships worth up to $8,000 in grades K-8 and $12,000 in high school to low-income children in D.C. to attend any of more than 50 participating private schools.

When the Opportunity Scholarship Program was launched in 2004, the U.S. Department of Education’s Institute of Education Sciences selected me to lead the initial government evaluation of this pilot program in parental school choice. Demand for scholarships exceeded supply, so most applicants faced a lottery to determine if they would receive an Opportunity Scholarship, permitting us to use a “gold standard” experimental research design to determine what impact the program had on participants.

Students in our pioneering study graduated from high school at a rate 21 percentage points higher than they otherwise would have as a result of using an Opportunity Scholarship. In scientific terms, we are more than 99 percent confident that access to school choice through the Opportunity Scholarship Program was the reason students in the program graduated at these much higher rates. “Graduating from high school is an economic imperative.” Those are not my words, but those of President Obama, in a speech to the U.S. Chamber of Commerce in 2010.

Each additional high school graduate saves the nation an average of $260,000 thanks to increased taxes on higher lifetime earnings and lower law-enforcement and welfare costs.

Thus, the 449 additional high school graduates obtained through operation of the Opportunity Scholarship Program during its pilot produced a return on investment of $2.62 for every dollar spent. The D.C. Opportunity Scholarship is not the only private school choice program to demonstrate a clear and dramatic impact on boosting educational attainment.

Researchers at Harvard University and the Brookings Institution determined that a privately funded K-12 scholarship program in New York City significantly increased the rate at which black and immigrant students enrolled in college. Increasingly and consistently, researchers are finding that private school choice programs like the Opportunity Scholarship Program enable students to go farther in school.

Private school choice policies are an integral part of the fabric of American education policy.

Evidence that students achieved higher test scores because of the Opportunity Scholarship Program was only consistently conclusive in reading and for three subgroups of students: females, students with relatively higher performance at baseline and students transferring from better-performing public schools. Our study uncovered no program impacts on student math scores. Parents were more satisfied with their child’s school as a result of the Opportunity Scholarship Program and rated the schools safer.

When a previous Congress closed the Opportunity Scholarship Program to new students and reduced its funding, parents in the program put actions behind their words of praise for the program.

Parents rose up in peaceful protest, participating in rallies, writing letters to Congress and testifying at congressional hearings, to save the program. Ultimately, they triumphed, as the Opportunity Scholarship Program was reauthorized and expanded in 2011 with passage of the Scholarships for Opportunity and Results, or SOAR, Act. That entire amazing story is captured in a book I recently co-authored with Dr. Thomas Stewart called “The School Choice Journey: School Vouchers and the Empowerment of Urban Families.”

The research record from the carefully studied pilot period of the D.C. Opportunity Scholarship Program is filled with good news.

Students graduated from high school at much higher rates because they used a scholarship. The program appears to have had a positive effect on student reading test scores, though we can only have a high level of confidence about that impact for certain subgroups of students. Parents have been empowered and report their children are in better and safer schools.

Importantly, D.C. parents view the program as one worth fighting for. Policymakers should give all of these facts careful consideration when they plan the future of District of Columbia Opportunity Scholarship Program.