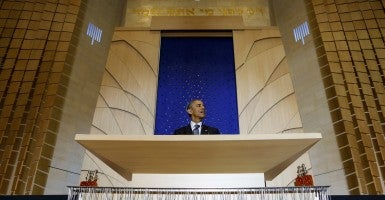 In a step to reassure American Jews that he supports Israel, President Obama today became the fourth president to speak before an audience at a U.S. synagogue.

Wearing a white kippah, Obama stood on the bimah of Washington’s Adas Israel—a prominent synagogue of conservative Judaism—and declared that he, and the United States, indeed has Israel’s back despite divisions between the two countries’ governments.

After the remarks, in which he called himself  “an honorary member of the [Jewish] tribe,” a crowdful of American Jews asserted they were happy to have him.

“He’s got Israel’s back and appreciates Jewish values,” said one attendee, Ruthanne Miller, of Obama. “He’s a cool president. He gets a bad rap because he sometimes disagrees with [Prime Minister Benjamin] Netanyahu. But that’s what friends do. Friends are honest and are going to disagree.”

At the synagogue, Obama “forcefully” objected to criticism that his disagreements with Netanyahu shows a lack of support for Israel. Echoing those words, American Jews who watched the president speak insisted in interviews with The Daily Signal that defending Jews means criticizing Israel when necessary.

“It was a very positive and reassuring address,” said Howard Marks, as he clutched two bags of challah bread. “This president has helped Israel’s security more than any other. The poor relationship he has with Netanyahu has hurt Obama’s image. But there’s plenty of blame to go around on both sides.”

“Of course, allies disagree,” Marks added. “Just like we disagree with the French, and the British. Even within families, people disagree. At the end of the day, the alliance is strong and we have shared values that strongly bind us.”

The American Jewish attendees felt that Obama didn’t use the speech to convince them to back his Middle East policies—though all who spoke with The Daily Signal support the president’s push for a nuclear deal with Iran and for a two-state solution to the Israeli-Palestinian conflict.

Rather, they believe the president tried to strike a personal, emotional connection with his Jewish listeners.

“It is precisely because I care so deeply about the state of Israel,” Obama said, “that I feel a responsibility to speak out honestly about what I think would lead to long-term security and to the preservation of a true democracy in the Jewish homeland, and I believe that’s two states for two peoples, Israel and Palestine living side-by-side peacefully.”

“For Israel to thrive as a democracy, it has to be a two-state solution,” Miller said. “But it’s hard. This is a dangerous neighborhood we are walking into.”

Patricia Levy, another attendee of the speech, cares “deeply” about Israel and the Jewish community.

She has family, including a brother, who live in Israel, and when they talk, they rarely speak about the politics of Obama and Netanyahu.

“The image of Israel is getting so torn apart in the world’s view and it’s upsetting,” Levy said. “But [Obama] understands that fundamentally we are a good people. He knows that Jews value all human life and that we have Israel’s back when it comes to their existence.” Like the others, Levy believes there’s room for disagreement in the U.S.-Israeli alliance. For instance, she believes that Israel should back off its settlement building in the West Bank.

“It’s a tricky, delicate issue,” Levy said. “I feel that too many people say that because he [Obama] disagrees with Netanyahu, he is not a friend of Israel. I don’t go that far. I think Netanyahu sometimes has been a bit of a d***. There’s no clear solution.”

Nowhere is that unclarity more true than over the best way to handle Iran’s nuclear ambitions.

For American Jews, hanging above the optimism surrounding Obama’s commitment to them is a persistent worry regarding the unresolved Iran deal.

Obama sought to allay the anxiety.

“I will not accept a bad deal,” Obama said. “[Because] this deal will have my name on it.”

Meanwhile, Marks acknowledged he’s “very concerned” about the possibility of Iran getting a nuclear weapon under the deal, though he’s encouraged that Congress will have the authority to hold off on removing some sanctions.

Samara Langsam, a student at Richard Montgomery High School in Rockville, Md., who attended Obama’s speech with her grandmother, realizes that the result of the Iran nuclear deal will be especially relevant for her generation.

“Diplomacy needs to be tried before war,” Langsam said. “I’m happy that Congress had a chance to debate it. A policy this important needs to be debated by many and not decided by one person.”

Levy, who wears a Star of David necklace, doubts she can trust Iran’s anti-semitic regime.

Her worries are especially profound considering the resurgence of anti-semitism in Europe.

But she trusts Obama and believes that if there were any other way, he would pursue it.

“In theory, diplomacy is the right track,” Levy said. “Maybe he is being naive and idealistic. But I don’t think anyone can do better.”