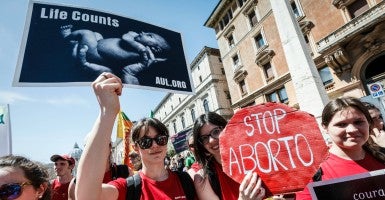 Two bills have been signed by Tennessee Gov. Bill Haslam, a Republican, that could not have passed before voters approved an amendment to the state constitution in last November’s elections.

One of the bills requires a 48-hour waiting period between counseling and an abortion, and another puts in place new regulations for abortion clinics as Tennessee moves to align its abortion restrictions with those of other Southern states, such as Alabama, Arkansas and Mississippi.

For many pro-life organizations and individuals, these bills represent the culmination of a 14-year battle that began in 2000 with the Tennessee Supreme Court case Planned Parenthood of Middle Tennessee v. Sundquist, in which the court ruled that a woman’s “fundamental right” to abortion was an integral facet of the right to privacy.

But last November, Tennesseans passed an amendment to the state constitution that stipulates that constitution neither “secures” nor “protects a right to abortion or requires the funding of an abortion.” Instead, it places all decisions about abortion policies in the hands of the voters through their elected officials, rather than those of Tennessee’s five Supreme Court justices.

According to a poll conducted by Vanderbilt University, 20 percent of Tennessee residents believe abortion never should be legal, and 50 percent believe it should be legal only in cases where rape or incest have occurred or where the mother’s life is in jeopardy. Before the amendment passed, the five justices on the Tennessee Supreme Court made a decision at odds with the views of Tennesseans, inventing a right to abortion-on-demand even broader than the right the U.S. Supreme Court recognized in its 1973 decision in Roe v. Wade, a point acknowledged by Justice William Barker in his dissent.

As a result of the 2000 ruling, Tennessee gained the distinction of being the “abortion capital of the Bible Belt,” eventually ranking third in the nation in the percentage of abortions performed for out-of-state women.

For 14 years, Tennesseans were powerless to pass the kinds of measures protecting the health of women and the lives of unborn children that surrounding states were beginning to adopt and that Tennessee residents presumably favored.

Amending a constitution never should be done for transient causes and will not be the best option in most cases. Nonetheless, the case in Tennessee can serve as an example for how citizens should approach their role in governing.

Citizens should pay attention to how laws are made. When a few people in a courtroom invent new rights and reign supreme, the public has a right to reclaim its role in our political system.